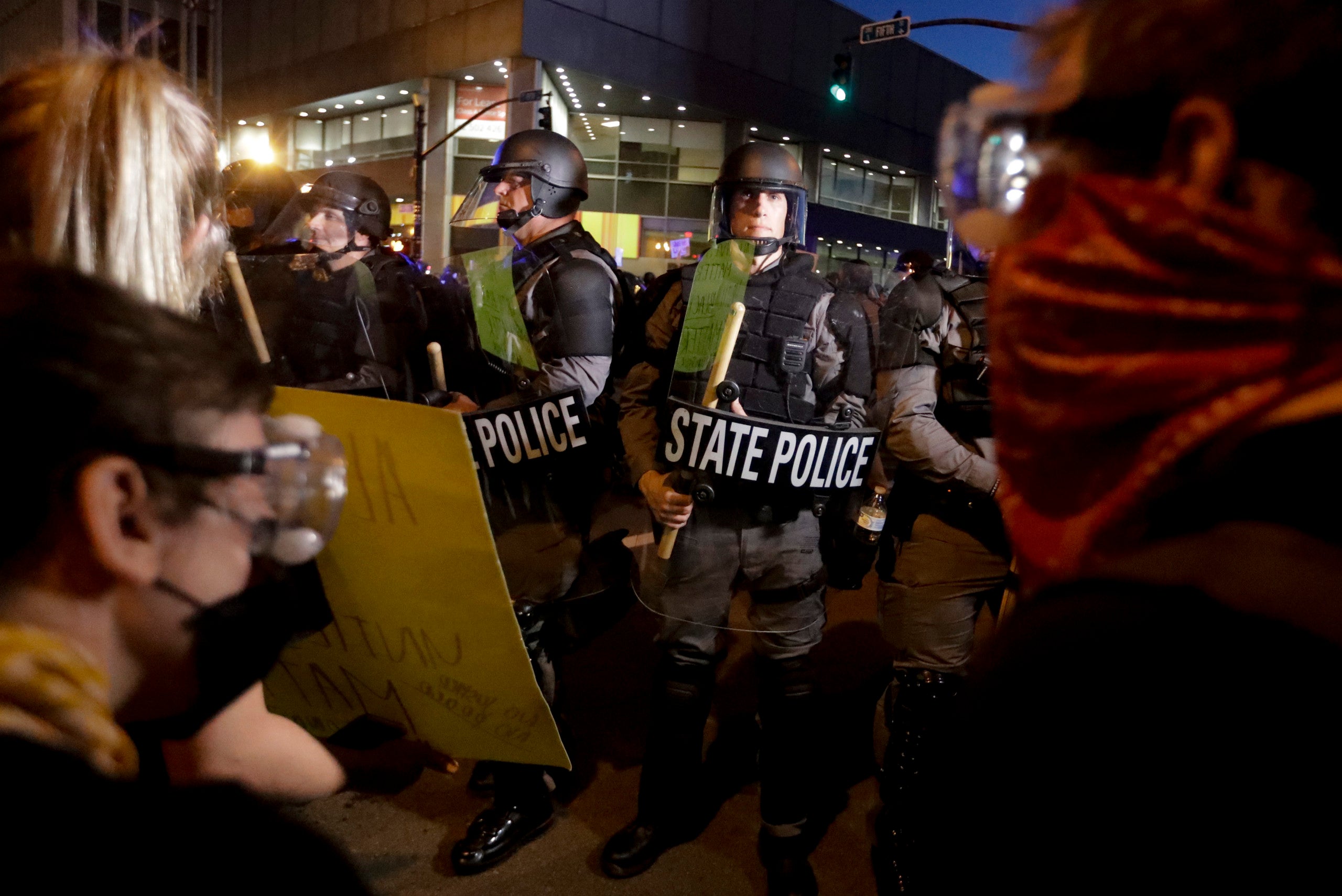 LOUISVILLE, Ky. (AP) — A police officer was seen on camera firing what appeared to be pepper balls at a news crew during a live television broadcast of the second night of Louisville protests, prompting an apology from the Louisville Metro Police Department.

A crew from WAVE-TV was downtown in the Kentucky city Friday night, covering demonstrations over the death of Breonna Taylor, a black woman killed by police in her own home in March. Police presence intensified around 9:45 p.m., as officers in riot gear stood shoulder-to-shoulder moving people down a key street near City Hall, the Courier Journal reported.

As WAVE-TV was on air, reporter Kaitlin Rust is heard yelling off-camera: “I’ve been shot! I’ve been shot!” Video shows a police officer aiming directly at the camera crew, as Rust describes the projectiles as “pepper bullets.”

“I want to apologize,” Louisville police spokeswoman Jessie Halladay told the Courier Journal. “It’s not something that should have occurred if she was singled out as a reporter.”

Halladay said she couldn’t tell who the officer was at this time, but that police would review the video again and “if we need to do any investigation for discipline, we will do that.”

The video shows Rust and the camera crew moving away as indignant in-studio anchors ask if they’re OK and what’s going on. Rust tells them they’re OK, and that the crew was behind the line, but police wanted them to move further away.

“Well I’m sure if they would have just said, ‘Move,’ you would have done so,” an anchor is heard telling Rust.

A clip of the WAVE-TV broadcast posted to Twitter amassed more than 8 million views in less than six hours, and was retweeted more than 50,000 times, including by other journalists and rapper Ice-T.

Louisville’s protests followed the release of a 911 call Taylor’s boyfriend made March 13, moments after the 26-year-old EMT was shot eight times by narcotics detectives who knocked down her front door. No drugs were found in her home. Taylor’s death has captured national headlines alongside the killings of Ahmaud Arbery in Georgia in February and George Floyd, the black man who died after a white Minneapolis police officer pressed his knee into Floyd’s neck for several minutes as he pleaded for air.

Protesters carried signs calling for justice for Taylor and Floyd, whose death has touched off protests across the country this week, including in Minneapolis itself. The use of non-lethal force on the WAVE-TV crew happened the same day CNN employees were arrested live on air while covering protests in Minnesota.

“This violence and destruction is absolutely unacceptable. It besmirches any claim to honor Breonna Taylor’s memory,” Fischer said in a statement. “Just this morning, Breonna’s family called for peaceful and safe protest.”

Fischer said most of the grievances associated with Taylor’s death have been addressed in a live-streamed press conference after 1 a.m. Fischer had announced Friday that the use of no-knock warrants by police were being suspended, the latest in a series of policy changes and other actions in response to Taylor’s death.

Fischer and Halladay said police believed a “significant percentage” of protesters came from outside Louisville.

“I don’t know anyone from our great city that wants to destroy it,” he said.