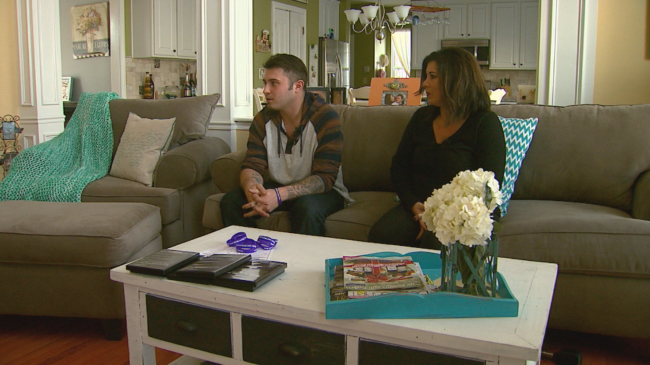 FISHERS, Ind. (WISH) – Nestled inside Gina Bardach’s Fishers home is a series of superlatives posted on her living room walls. Words such as inspire, believe, and dream are dotted across the room.

A little over three years ago, Bardach’s son, Brandon Villa, faced a struggle for his life. Brandon’s heroin addiction almost destroyed him.

Bardach sent Brandon to California to spend time with his father to help him overcome his addiction.

“I think about it all the time,” said Bardach, as she used her hands to wipe her tears.

Brandon stopped using cold turkey. He experienced extreme pain, sickness, and even seizures. When he returned to Indianapolis after more than six months, he came back home clean.

“I do a lot of sharing about my progress on Facebook,” said Brandon.

Since his recovery, Gina and Brandon decided to create Hope and OVERcoming, Inc. The charitable organization in Hamilton County is dedicated to eliminating heroin and opioid use, according to the group’s website.

The two help to create drug counseling for addicts and parents. The two also developed documentaries and have talked to classrooms and juvenile detention centers.

Bardach believes there are three options for those addicted to heroin. She believes it will end in death or prison; however, she says the third option gives hope.

“You’re going to find recovery and fight for it every day. You can’t make them get clean; you have to work for it,” said Bradach.

She added that heroin use among teenagers and young adults is a topic that is often shun in Hamilton County.

Back in 2008, Forbes.com named Hamilton County as one of America’s Best Places to Raise a Family. Top-ranked schools, affordable housing, and a strong economy were some of the reasons that catapulted the county to the desirable ranking.

It’s because of that ranking that Bradach believes many are unwilling to talk about the heroin epidemic in the county. When she started Hope and OVERcoming, she expected to receive backlash from the neighbors and others in her community. Instead, she got phone calls from parents who expressed to her that their children need help.

The goal is to eventually start a drug rehabilitation center in Hamilton County. The group is currently fundraising.