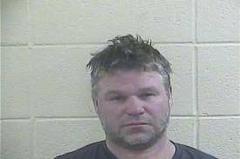 JASPER, Ind. (WISH) – A Dubois man was arrested for OWI on Sunday afternoon after driving to and parking his car in the Indiana State Police Post in Jasper.

A police officer thought it suspicious that Jacob A. Zehr II, 41, chose to park in the police parking lot, so around 5:50 p.m. the police officer went to Zehr’s 2000 Chevrolet Cavalier to ask him if he needed assistance.

According to the report, when Zehr was explaining his presence in the parking lot – that he was meeting the mother of his children to drop off his two children – the police officer reported smelling alcohol.

After a short investigation, police found Zehr had a blood alcohol level of .08 percent.

Zehr was arrested and taken to the Dubois County Security Center, and faces possible charges of operating while intoxicated with minor passengers and two counts of neglect of a dependent, all of which are Level 6 felonies.