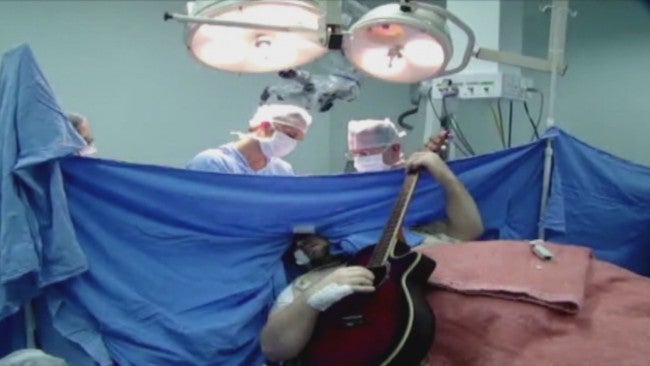 INDIANAPOLIS (WISH) – Video of a 33-year-old Brazilian man in surgery is being shared on social media. The catch, he’s conscious throughout the entire procedure and playing his guitar.

Anthony Kulkamp Dias underwent surgery to remove a brain tumor on Wednesday. He was kept conscious to avoid risking a loss of important brain functions.

An expert said brain surgeries are normally performed with the patient under anesthesia, but since the tumor was close to areas that can impact speech and movement, there was a risk of loss of function if injured during the procedure.

And in this case, Dias managed to stay awake, as he played his guitar and sang.

Dias, who has played guitar professionally for 20 years, discovered the tumor 15 days after his son was born. He went through six songs, including one he had written for his newborn son.

“My right hand was a bit weaker because that was the side that they were operating on. So I stopped and rested,” he said.

“The doctors asked me to repeat the country song so I even had an encore,” he told Brazilian news source GloboNews.

This was the hospital’s 19th time doing a procedure with cerebral monitoring.

What did you think of this story? Watch the video above and then tell us your thoughts on our Facebook page!