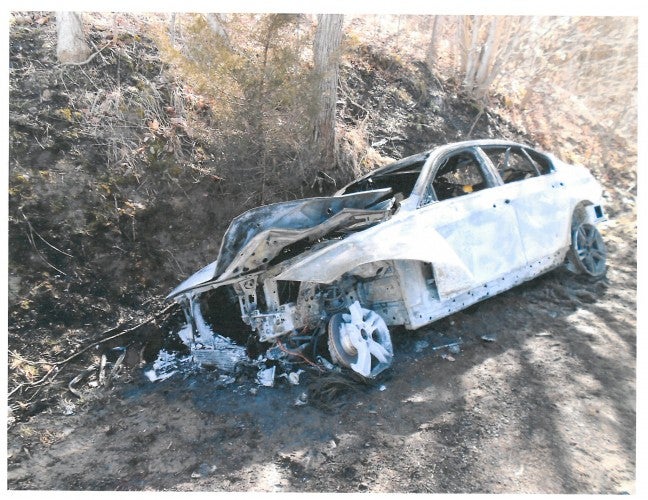 TRAFALGAR, Ind. (WISH) – Jim Arvin had been fishing on Lamb Lake on Wednesday afternoon and decided to take his boat trailer into town for a wash.

Instead of turning where he normally would he continued on, and that’s when he spotted the car that had missed the curve in the road and crashed into a ditch.

He saw the car in the ditch and then he saw the flames, 24-Hour News 8’s news partner The Daily Journal reports.

As he approached the car the flames did not look high, but when he pulled the driver out he saw her eyebrows and hair had been singed.

Arvin grabbed the small fire extinguisher he kept on his boat and some bottles of water and tried to put the flames out.

At the same time, he had to persuade the driver, Mary Harmon, 53, Indianapolis, not to go back to get her purse out of the car.

He kept the flames low for a little while, but within moments the fire grew and eventually the entire vehicle was ablaze.

“I only did what I think anyone would have done, after seeing what was happening, you just had to react,” he said. “You just had to do it. I couldn’t have done anything else.”

Harmon was dazed after the accident and passed out a couple of  times. She was taken to Community Hospital South. Her condition was not available Thursday.

Arvin, who owns Superior Fence Co. in Indianapolis, went on with his week but felt fortunate for being there to help.

“I don’t think she even realized the seriousness of it,” he said.

Arvin initially worried he would not be able to get the driver out of the car, but the car door opened easily allowing him to get her out and to safety quickly.

“It was real apparent when I pulled up, I saw something in the ditch, it had just happened, there was smoke and flames,” Arvin said. “There wasn’t a whole lot of decision to make, other than getting her and getting her out.”

The fire department arrived within about 10 minutes of him calling 911, but the car went up in flames pretty quickly, he said.

“I just thought I could hopefully get it before it burned,” Arvin said.

Arvin is grateful he decided to wash his boat trailer that day.

“I felt fortunate I was able to help,” Arvin said.