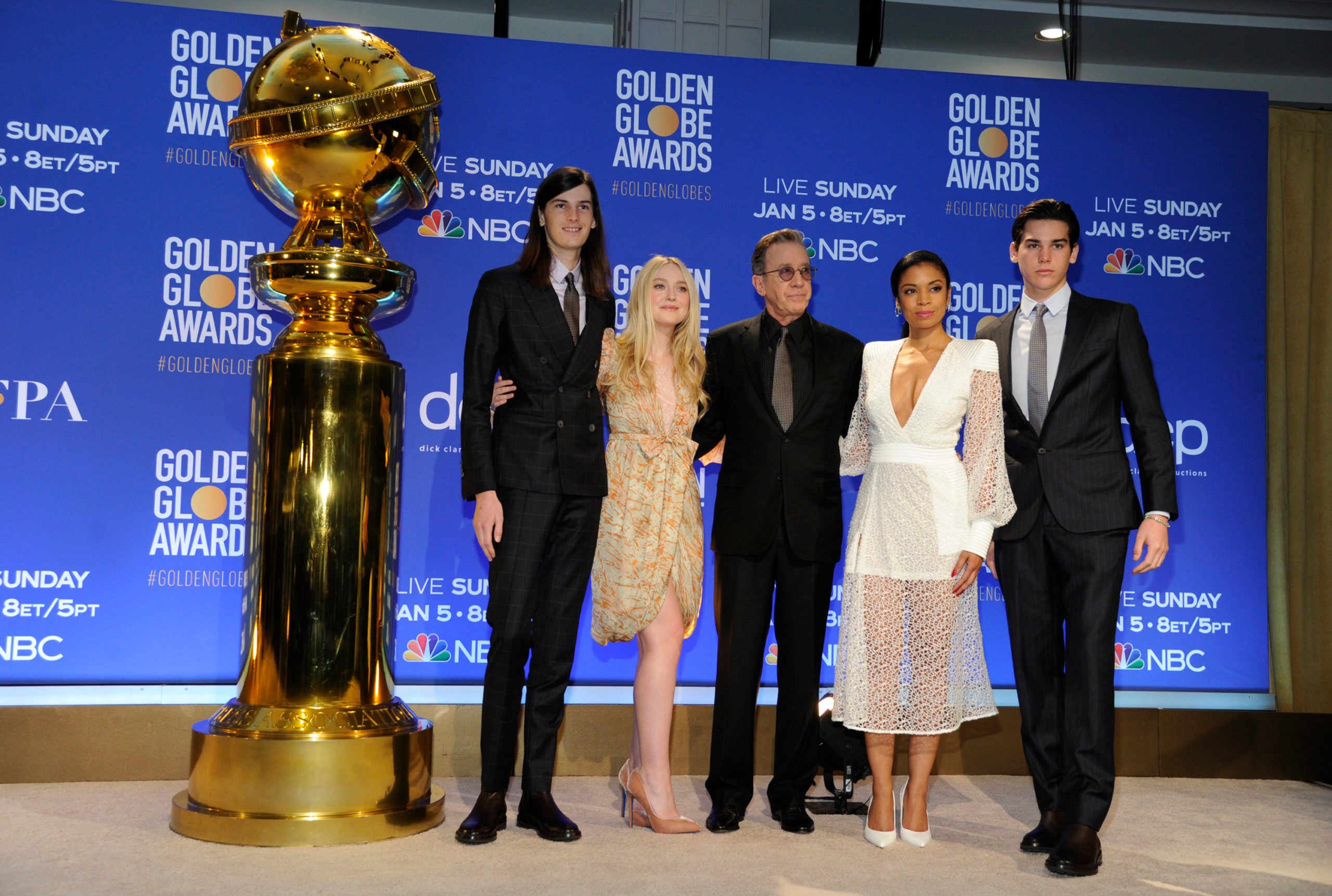 NEW YORK (AP) — A Netflix wave swept over the 77th Golden Globe nominations, where the streaming company dominated with 34 total nominations, including four films up for best picture and four series nominated for the top television awards.

Noah Baumbach’s divorce drama “Marriage Story” led all films with six nominations including best picture, drama, and acting nods for its two leads, Adam Driver and Scarlett Johansson, in nominations announced Monday by the Hollywood Foreign Press Association in Beverly Hills, California. “Marriage Story,” which landed on Netflix on Friday after a three-week run in theaters, also earned nods for Baumbach’s script, Laura Dern’s supporting performance and Randy Newman’s score. The only notable category it missed on was Baumbach for best director.

Quentin Tarantino’s 1960s Los Angeles fable “Once Upon a Time … in Hollywood,” a Sony Pictures release, also scored five nominations, including best film comedy or musical and nods for Brad Pitt and Leonardo DiCaprio. Tarantino is also up for best director. In a statement, DiCaprio called it “a love letter to Los Angeles” and “a celebration of cinema.”

But the degree to which cinema — that word that Scorsese has passionately argued for this season — is changing was overwhelmingly apparent in Monday’s nominations. And just as it is girding for battle with a host of new streaming services, Netflix flexed its muscles across all categories. HBO Max and NBCUniversal’s Peacock are set to join the streaming fray next year, on the heels of the launch of Apple TV-Plus and Disney-Plus.

For now, Hollywood belongs to Netflix. It also scored best picture nods for the Vatican bromance “The Two Popes” in the drama category (along with nominations for its stars, Jonathan Pryce and Anthony Hopkins); and the Eddie Murphy-led “Dolemite Is My Name” in the comedy category (along with an acting nod for Murphy).

Two Netflix series tied HBO’s “Chernobyl” with the most nominations on the TV side with four nods: “The Crown” and “Unbelievable.” Netflix’s “The Kominsky Method” and “The Politician” additionally landed best series, comedy or musical, nominations alongside Emmy favorites “Fleabag,” from Amazon, and HBO’s “Barry.”

Led by “Succession,” “Big Little Lies” and “Chernobyl,” HBO still had a strong showing with 15 nods overall, second to Netflix’s 17 television nominations — even if the final season of “Game of Thrones” failed to make it into the best drama series category.

But streaming services made greater inroads to one of Hollywood’s premier parties than ever before, reflecting the industry’s quickening realignment. Amazon had eight nominations in total, boosted by “The Marvelous Mrs. Maisel” and “Fleabag.” The recently launched Apple TV Plus scored its first Globes nominations with “The Morning Show,” including nods for Jennifer Aniston and Reese Witherspoon. Broadcast networks were shut out entirely.

But shed a tear for Baby Yoda. Disney Plus’ “The Mandalorian” didn’t make the cut.

Yet if the Globes nominations gave a snapshot of the changing media landscape, some saw a notable lack of progress in other areas. The press association again fielded an all-male directing category, nominating Scorsese, Tarantino, Bong Joon Ho (“Parasite”), Sam Mendes (whose World War I thriller “1917” was also nominated for best picture, drama) and Todd Phillips (“Joker”).

Among those left out were Greta Gerwig (“Little Women”), Lulu Wang (“The Farewell”) and Marielle Heller (“A Beautiful Day in the Neighborhood”). The Globes have only ever nominated five women for best director. At the 2017 awards, Natalie Portman pointedly introduced the category’s “all-male nominees.”

None of this year’s 10 nominees for best picture were directed by women, either. Most notably overlooked was Gerwig’s upcoming Louisa May Alcott adaptation “Little Women,” which was nominated for Saoirse Ronan’s lead performance and Alexandre Desplat’s score. Adding to the trend was the omission, on the TV side, of Ava DuVernay’s acclaimed Central Park Five miniseries “When They See Us.”

Alma Ha’rel, director of the acclaimed “Honey Boy,” on Twitter listed nine female filmmakers whose movies touched audiences, writing: “That’s our awards. No one can take that away.” In a statement, Ronan emphasized her director: “My performance in this film belongs to Greta as much as it does to myself and I share the recognition completely with her.”

Rebecca Goldman, Time’s Up chief operating officer, said the omission was reflective of “an industry-wide crisis” and was “unacceptable.”

“This year, there have been twice as many women-led features than ever, with more films by female directors on the way,” said Goldman. “And yet, as today’s nominations show, women — and especially women of color — continue to be pushed to the sidelines by a system that holds women back, onscreen and off.”

The awards campaign of “Joker” got a lift Monday, also landing nods for best film, drama, and for Joaquin Phoenix’s performance. With more than $1 billion in worldwide ticket sales, it’s easily the biggest blockbuster to crash the Globes.

A handful of likely best-actress Oscar contenders nabbed a nomination, including Renee Zellweger (“Judy”), Charlize Theron (“Bombshell”) and Cynthia Erivo (“Harriet”). Jennifer Lopez (“Hustlers”) secured her expected nod for best supporting actress, as did Tom Hanks, for best supporting actor, for his Mister Rogers in “A Beautiful Day in the Neighborhood.”

“There are only two things I let interrupt my beauty sleep: fire alarms and the Golden Globes nominations,” said “Jojo Rabbit” writer-director Taika Waititi. “Thank you HFPA for acknowledging that comedy can be a powerful tool against hate and supporting ‘Jojo Rabbit.’”

Several possible Academy Awards favorites weren’t eligible in the Globes’ top categories. Even though the press association is a group of foreign journalists based in Los Angeles, they don’t nominate international films for best drama or best comedy/musical. That ruled out Bong’s social satire “Parasite” (which the Los Angeles Film Critics Association voted the year’s best on Sunday) and Wang’s family drama “The Farewell.” Both are expected to be in the Oscar mix.

“For me, foreign language film is best picture,” Bong said by phone. “Directors like Almodovar and Scorsese, who are nominated for best director, I’ve studied them since I was young, so just to be among them was an honor, regardless of the category. Because Almodovar is also only nominated for best foreign language film, it makes it an honor for me.”

Vying for best animated feature are: “Frozen 2,” “How to Train Your Dragon: The Hidden World,” “The Lion King,” “Missing Link,” and “Toy Story 4.” The award wasn’t necessarily one sought by “The Lion King.” Disney has argued that Jon Favreau’s remake, made largely with computer generated imagery, is live-action.

The Globes, with 87 voting members, differ wildly from the Academy Awards, which are decided by 9,000 industry professionals. But the press association’s choices sometimes line up with the academy’s, like last year when “Green Book” (entered as a comedy at the Globes) triumphed at both.

This year could give the Globes slightly more sway because the awards season is especially truncated. The Academy Awards are being held several weeks early, on Feb. 9, giving Oscar campaigns less time to find momentum.

Ricky Gervais will host the Globes, broadcast on NBC, for the fifth time on January 5. In addition to being a supporting acting nominee, Hanks will receive the Cecil B. DeMille Award. The Carol Burnett Award will go to Ellen DeGeneres.

One movie that didn’t scratch out much love Monday: “Cats.” Press association members screened Tom Hooper’s upcoming, much-memed adaptation of the Broadway musical but rewarded it with only a nod for the Andrew Lloyd Webber-Taylor Swift song “Beautiful Ghosts.”