Doctors may be better equipped to handle latest virus surge 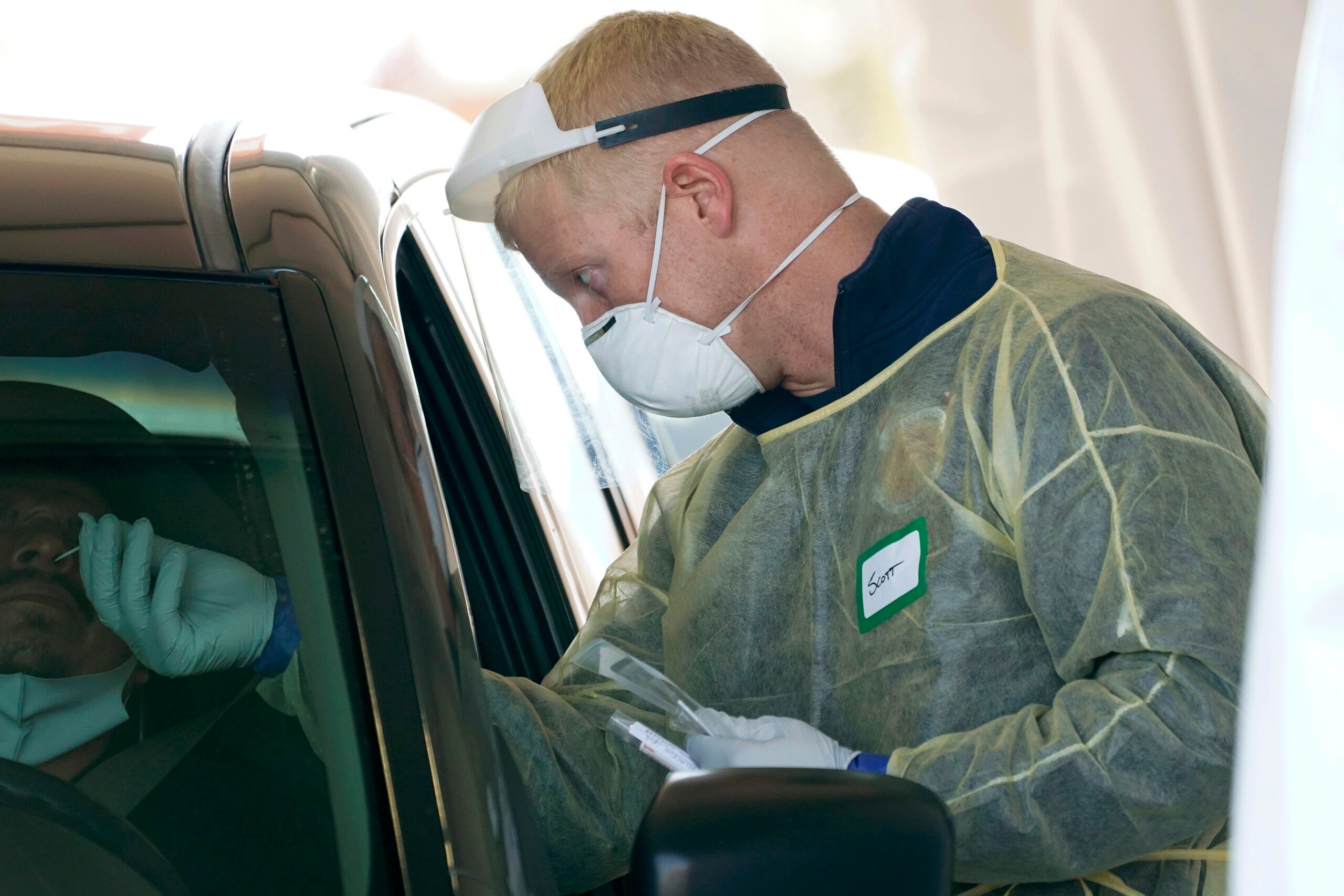 FILE - In this Oct. 28, 2020, file photo, a worker wearing gloves, a face shield, a mask, and other PPE administers a COVID-19 test at a King County coronavirus testing site in Auburn, Wash., south of Seattle. The latest surge in U.S. coronavirus cases appears to be larger and more widespread than the two previous ones, and it is all but certain to get worse. But experts say there are also reasons to think the nation is better able to deal with the virus than before, with the availability of better treatments, wider testing and perhaps greater political will. (AP Photo/Ted S. Warren, File)
by: MIKE STOBBE AP Medical Writer
Posted: Nov 10, 2020 / 12:13 PM EST / Updated: Nov 10, 2020 / 12:13 PM EST

NEW YORK (AP) — The latest surge in U.S. coronavirus cases appears to be much larger than the two previous ones, and it is all but certain to get worse — a lot worse. But experts say there are also reasons to think the nation is better able to deal with the virus this time.

“We’re definitely in a better place” when it comes to improved medical tools and knowledge, said William Hanage, a Harvard University infectious-disease researcher.

To be sure, the alarming wave of cases across the U.S. looks bigger and is more widespread than the surges that happened in the spring, mainly in the Northeast, and then in the summer, primarily in the Sun Belt.

Newly confirmed infections in the U.S. are running at all-time highs of well over 100,000 per day, pushing the running total this week to more than 10 million. Deaths — a lagging indicator, since it takes time for people to get sick and die — are climbing again, reaching an average of more than 930 a day.

Hospitals are getting slammed. And unlike the earlier outbreaks, this one is not confined to a region or two. Cases are on the rise in 49 states.

“The virus is spreading in a largely uncontrolled fashion across the vast majority of the country,” said Dr. William Schaffner, an infectious-disease expert at Vanderbilt University.

But there is also some good news.

Doctors now better know how to treat severe cases, meaning higher percentages of the COVID-19 patients who go into intensive care units are coming out alive. Patients have the benefit of new treatments, namely remdesivir, the steroid dexamethasone and an antibody drug that won emergency-use approval from the Food and Drug Administration on Monday. Also, testing is more widely available.

In addition, a vaccine appears to be on the horizon, perhaps around the end of the year, with Pfizer this week reporting early results showing that its experimental shots are a surprising 90% effective at preventing the disease.

And there’s a change pending in the White House, with President-elect Joe Biden pledging to rely on a highly respected set of medical advisers and carry out a detailed coronavirus plan that experts say includes the kind of measures that will be necessary to bring the surge under control.

Biden pledged during the campaign to be guided by science, make testing free and widely available, hire thousands of health workers to undertake contact-tracing, and instruct the Centers for Disease Control and Prevention to provide clear, expert advice.

“We are already seeing encouraging signs from President-elect Biden with regard to his handling of COVID-19,” said Dr. Kelly Henning, a veteran epidemiologist who heads the Bloomberg Philanthropies’ public health programs.

“I am relieved to see he’s already put some of the smartest, scientific minds on his new coronavirus task force and that they are acting urgently to try and get the pandemic under control as quickly as possible.”

While the first surge in the Northeast caught many Americans unprepared and cut an especially deadly swath through nursing homes, the second crest along the nation’s Southern and Western rim was attributed mostly to heedless behavior, particularly among young adults over Memorial Day and July Fourth, and hot weather that sent people indoors, where the virus spreads more easily.

The fall surge similarly has been blamed largely on cold weather driving people inside and disdain for masks and social distancing, stoked by President Donald Trump and other politicians.

Even in parts of the country that have been through coronavirus surges before, “you see people breaking out of it” and letting their guard down, Schaffner said.

“There really is COVID fatigue that is blending into COVID annoyance,” he said.

The short-term outlook is grim, with colder weather and Thanksgiving, Christmas and New Year’s ahead. Generations of family members gathering indoors for meals for extended periods “is not a recipe for anything good,” Hanage said.

Other factors could contribute to the spread of the virus in the coming weeks: Last weekend saw big street celebrations and protests over the election. On Saturday night, an upset victory by Notre Dame’s football team sent thousands of students swarming onto the field, many without masks.

Meanwhile, the next two months will see a lame-duck Congress and a president who might be even less inclined than before to enact disease-control measures. Those voted out of office or no longer worried about reelection for at least two more years, “are not going to be motivated to do a fantastic job,” Hanage said.

Experts are increasingly alarmed about the virus’s resurgence in places like Massachusetts, which has seen a dramatic rise in cases since Labor Day, blamed largely on young people socializing.

Republican Gov. Charlie Baker is warning that the health care system could become overwhelmed this winter, and he recently ordered restaurants to stop table service, required many businesses to close by 9:30 p.m., and instructed residents to stay home between 10 p.m. and 5 a.m.

“Right now because of the exponential growth, throw the kitchen sink at this, and then you can do it for not as long,” Nichols said.

Meanwhile, political leaders in a number of newer coronavirus hot spots are doing less. In hard-hit South Dakota, Gov. Kristi Noem has made it clear she will not institute a mask requirement and has voiced doubt in health experts who say face coverings prevent infections from spreading.

Even higher case and death rates have been seen in North Dakota, where many people have refused to wear masks. Gov. Doug Burgum has pleaded with people to do so, and praised local towns and cities that have mandated masks. But he has avoided requiring masks himself.

Both Noem and Burgum are Republicans and have taken positions in line with those of the president.

“It would be simplistic to say it’s a Red-vs.-a-Blue experience, but it does kind of go along party lines of whether people took it seriously, tried to prevent it and took painful measures, versus those who said, ‘Let it rip,’” said Dr. Howard Markel, a public health historian at the University of Michigan.