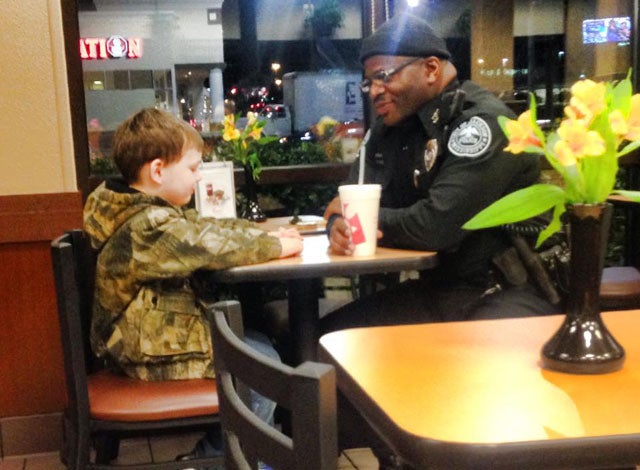 JACKSON, Miss. (WJTV) – A picture is worth a thousand words. Ashley Laine Cook posted a photo on Facebook, Feb. 4, it’s now gone viral. Her son Ethan, who is 5 years old, loves police officers and got a chance to sit down with a Jackson Police officer.

“I told y’all this son of mine will find a policeman everywhere we go!!! But, this one was special…. He invited Ethan to come eat at his table, he told Ethan to pray over the food before they ate, and he talked to him for 20 minutes about being good in school, making good grades, and how to stay out of trouble. Thank you Officer Bonds of the Jackson PD for being such a positive role model for my son and many more!! ‪#‎JacksonPD”

The officer has been identified as Jackson Police Officer Melvin Bonds.

He said in a statement, “I’m certainly humbled by all the attention this story has gained but the credit belongs to his mother and the hundreds of other JPD officers who perform similar acts everyday. She has instilled good family values in the young man and obviously trains her children to have a positive view of law enforcement. I hope the story inspires more parents to talk to their children about the proper way to interact with all authority figures. It would make the job a those who in public service so much easier.”