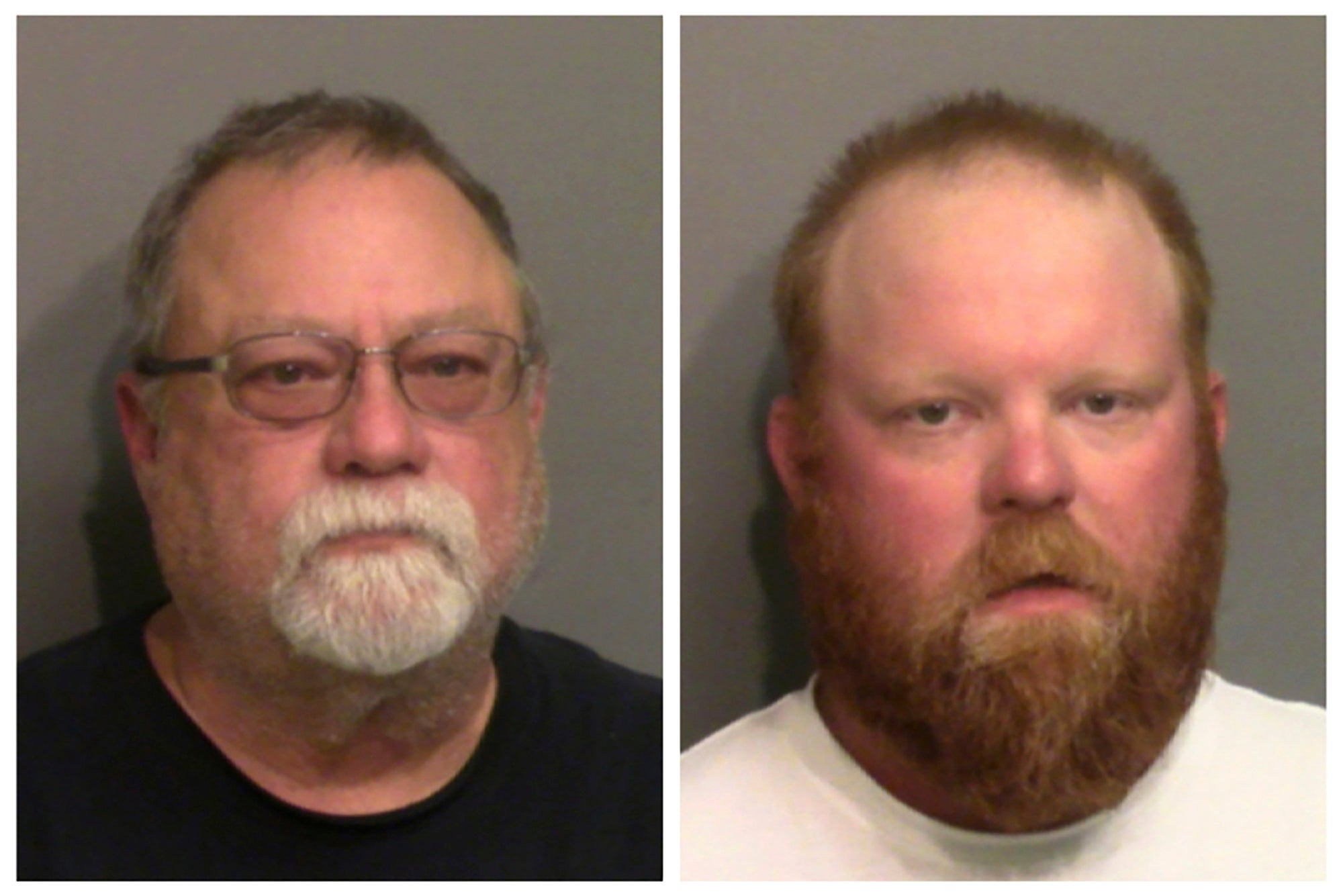 This Thursday, May 7, 2020, file photo combo of images provided by the Glynn County Detention Center in Georgia shows Gregory McMichael, left, and his son Travis McMichael. Georgia's attorney general on Sunday asked the U.S. Department of Justice to investigate the handling of the killing of Ahmaud Arbery, a black man who authorities say died at the hands of the two men as he ran through a neighborhood. (Glynn County Detention Center via AP, File)
by: RUSS BYNUM Associated Press
Posted: Jun 4, 2020 / 01:17 PM EST / Updated: Jun 4, 2020 / 01:17 PM EST

BRUNSWICK, Ga. (AP) — A state investigator alleged Thursday that a white man was heard saying a racist slur as he stood over Ahmaud Arbery’s body, moments after killing him with three shots from a pump-action shotgun.

The lead Georgia Bureau of Investigation agent in the case testified that Travis and Greg McMichael and a third man in another pickup, William “Roddie” Bryan, used their trucks to chase down and box in Arbery, who repeatedly reversed directions and even jumped into a ditch in a desperate struggle to escape.

Travis McMichael then got out of his truck and confronted Arbery, later telling police he shot him in self defense after Arbery refused his order to get on the ground, Special Agent Richard Dial said. A close examination of the video of the shooting shows the first shot was to Arbery’s chest, the second was to his hand, and the third was to his chest before he collapsed in the road, Dial said.

Bryan, who recorded that video, said he heard the gunman say a racist epithet as he stood over Arbery’s body before police arrived, Dial said.

The evidence presented Thursday to support a murder trial also raises questions about the idea that the McMichaels and Bryan were legitimately carrying out a citizens’ arrest of a suspected burglar.

Dial testified that Greg McMichaels told police that “he didn’t know if Mr. Arbery had stolen anything or not, but he had a gut feeling” that Arbery had committed prior break-ins in the neighborhood.

The testimony also could factor into a federal investigation into whether hate crime charges are warranted.

Dial testified that investigators found a Confederate symbol in Travis’ McMichael’s truck and several more racial slurs in messages on his phone. The U.S. Department of Justice said on May 11 that it is “assessing all the evidence to determine whether federal hate crime charges are appropriate.” Georgia is one of the few states that don’t have a hate crime law.

Travis McMichael, 34, his father Greg McMichael, 64, and Bryan, 50, were charged with murder more than two months after the Arbery was killed, after a series of recusals by southeast Georgia prosecutors and the emergence of Bryan’s video of the final encounter led to a state takeover.

Lawyers for the defendants and the state acknowledged the extraordinary context for the hearing, following a week of angry nationwide protests over law enforcement biases against black victims. Most wore masks when they weren’t speaking, conscious of the need to prevent spreading the coronavirus while most courts are closed due to the pandemic.

Arbery was killed Feb. 23 after the father and son armed themselves and gave chase when they spotted the 25-year-old black man running in their neighborhood just outside the port city of Brunswick. Bryan said he saw them driving by and joined the chase, Dial said.

Georgia law defines felony murder as a killing caused by the commission of an underlying felony. It does not require intent to kill. The minimum penalty is life in prison with a chance of parole.

Defense attorneys for both McMichaels have said much remains unknown about what led to the shooting and have cautioned against rushing to judgment. An attorney for Bryan has said he was merely a witness to Arbery’s death.

Largely peaceful protests following the deaths of George Floyd in Minneapolis, Breonna Taylor in Louisville, Kentucky, and Arbery have led to outbreaks of violence in many larger cities, including Atlanta.

A small crowd gathered outside the courthouse in Brunswick, where Gov. Brian Kemp promised a “strong state law enforcement presence” during and after the hearing.