Runner trades medal with competitor who tripped at finish line 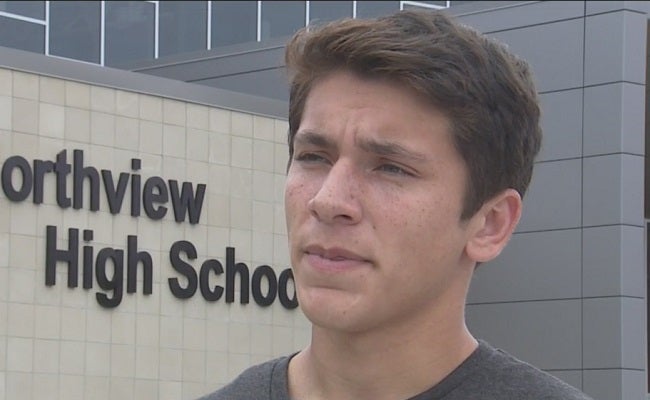 PLAINFIELD TOWNSHIP, Mich. (WOOD) – Sometimes, even the most widely used cliché really hits the mark. Case in point: a recent cross country track meet and the adage ‘It’s not whether you win or lose, it’s how you play the game.’

It was during Saturday’s RedHawk Invitational, hosted by Grand Rapids Union High School and including teams from all over the area.

The race for sixth and seventh place was kind of close. Northview junior Tyler Menhart trailed Union senior Dones Anewishki. By the time to two neared the finish line, it was clear that Anewishki would win.

He was just feet from the finish line and a sixth place medal when it happened:

“I just fell right into a pile of dirt,” he said.

That’s when the true meaning of sportsmanship, the thing parents try to instill in their kids in hopes it sticks with them through the rest of their lives, kicked in.

“He took a pretty nasty fall,” Menhart recalled. “And after I got my medal, I immediately turned around and I was like, ‘Here, you deserve this,’ and I gave him a hug.”

It was so unexpected that Anewishki tried to turn down the offer.

“He came up and he’s like, ‘You need to take this back,'” Menhart recalled. “I was like, ‘No, it’s yours, You deserve it. I wouldn’t have beaten you, you just had an unlucky turn of events.'”

“And then I was just like, ‘OK, here. Take mine then. You still earned one,'” Anewishki said.

And with that, it was settled.

The gesture didn’t change the official race results. Menhart still beat Anewishki. But in the end, both athletes hope their example resonates beyond the results.

“In a heartbeat, yeah, I would have done the same thing,” Anewishki said.

“Winning isn’t everything. It comes down to sportsmanship in the end,” Menhart said.

He apparently has a knack for reacting to things in a positive way.

This spring, he and a friend were warming up for soccer season when the friend had a medical emergency. Menhart called 911 and performed CPR before firefighters arrived. That friend was treated and is back on the soccer team with Menhart.