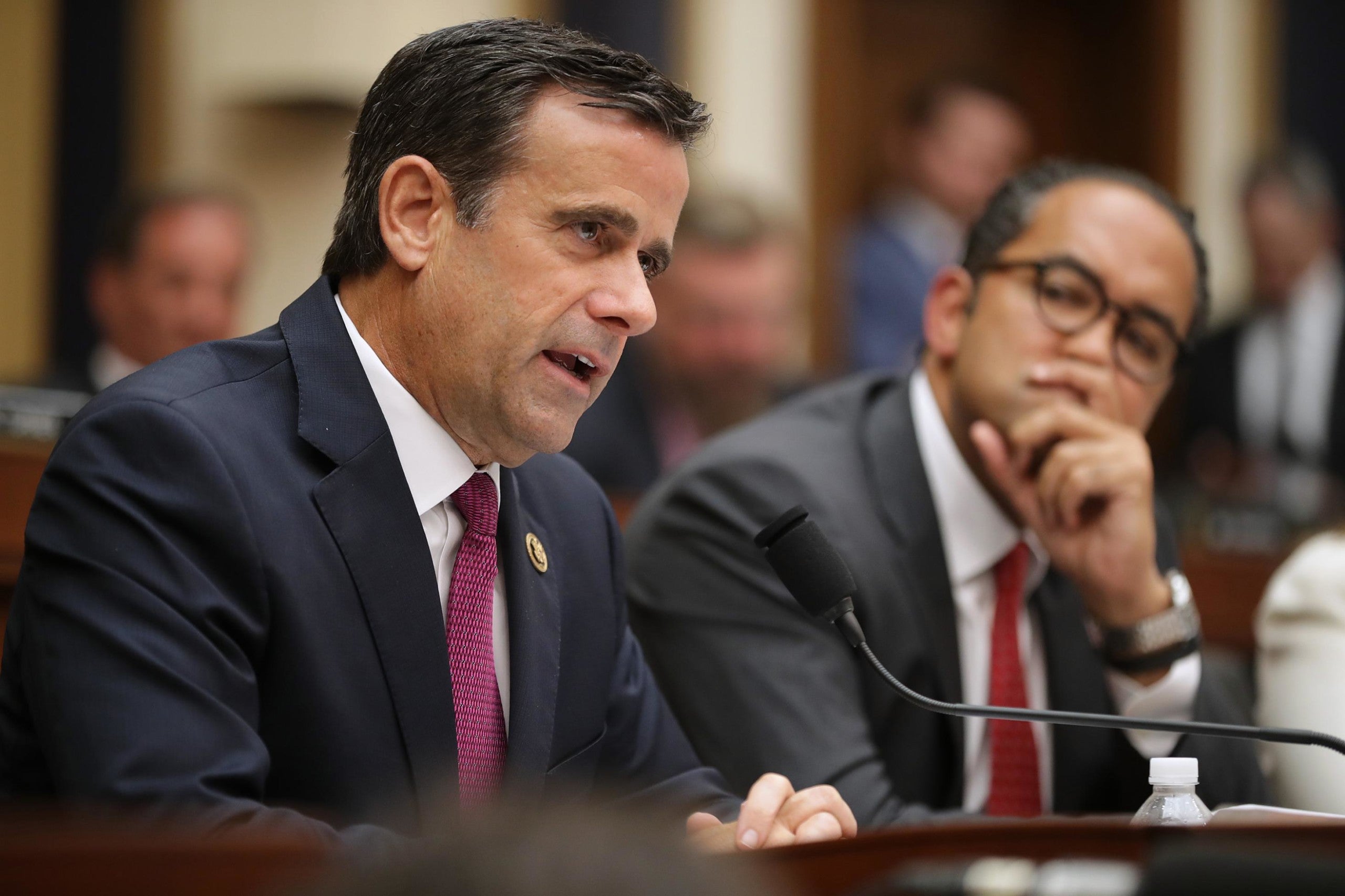 (CNN) — Rep. John Ratcliffe was confirmed Thursday as President Donald Trump’s top intelligence official on a party-line Senate vote, putting the Texas Republican into the center of a political firestorm over the FBI’s prosecution of Michael Flynn and its Russia investigation.

The Senate voted 49-44 to confirm Ratcliffe as the Trump’s second permanent director of national intelligence, with all Democrats opposed. The vote along straight party lines was a first for a position created after the September 2001 terrorist attacks — before Thursday, there were never more than a dozen senators who voted against a nominee for director of national intelligence.

Trump initially picked Ratcliffe last year to be his spy chief following Ratcliffe’s aggressive questioning of former special counsel Robert Mueller, and Trump’s decision to re-nominate Ratcliffe this year came after he was a key defender of the President during the House’s impeachment proceedings.

Now Ratcliffe will transition from being one of the President’s key defenders to leading an intelligence community that has been under constant fire from Trump, who has pushed unsubstantiated claims about a “deep state” of career officials trying to undermine his presidency.

In his new post, Ratcliffe will play an essential role in deciding what documents are released publicly in the middle of an election amid expanding congressional investigations that are targeting Obama administration officials and Trump’s 2020 opponent, former Vice President Joe Biden.

Ratcliffe will also now be a key decision-maker on reorganizing of the Office of the Director of National Intelligence after outgoing acting director Richard Grenell began an overhaul during his short tenure.

A CNN review of Ratcliffe’s testimony, television interviews and participation in the House’s impeachment proceedings provides clues as to how Ratcliffe will approach the numerous politically sensitive issues he faces at the Office of the Director of National Intelligence.

“I haven’t served in an intelligence agency. I think that bringing a different kind of experience today is really going to be vitally important,” Ratcliffe told Catherine Herridge of CBS News after he was nominated in March.

“You know all of the experience in the world isn’t helpful without judgment, and I think what we’ve seen is that some of our most experienced intelligence officials have gotten it wrong with respect to important issues,” Ratcliffe said.

At his confirmation hearing, Ratcliffe pledged to be an independent voice delivering intelligence assessments to the President, even those Trump doesn’t want to hear. But Democrats say they remain skeptical that Ratcliffe will shed his partisan record on the Russia investigation and election meddling when he joins the Trump administration.

“He gave carefully crafted answers, not answers that at least left me with the notion that he’s going to protect the community that’s currently under assault,” said Sen. Mark Warner of Virginia, the panel’s top Democrat.

Following his confirmation, Ratcliffe will succeed Richard Grenell, the acting director and a fierce Trump loyalist who has provided Congress with multiple newly declassified documents related to the FBI’s Russia investigation and the prosecution of Flynn, Trump’s first national security adviser.

Grenell, who is also the US ambassador to Germany, has been assailed by Democrats for politicizing intelligence and providing fodder for the White House and the Trump campaign to attack Biden and former President Barack Obama of an unnamed crime.

The documents Grenell declassified included a memo Obama’s national security adviser Susan Rice sent to herself and the list of more than three dozen individuals in the Obama administration who made “unmasking” requests during the Trump transition, where certain authorized US officials can request to view the names of Americans in foreign intelligence reports who are hidden.

Grenell’s time at ODNI may be running short, but the requests from members of Congress are not. This week, GOP Sens. Lindsey Graham of South Carolina, Ron Johnson of Wisconsin and Chuck Grassley of Iowa asked Grenell to provide them with additional names of officials in the Obama administration who made “unmasking” requests that involved members of the Trump campaign.

Democrats are also now asking Grenell to declassify the content of Flynn’s calls with Russian Ambassador Sergey Kislyak, which are at the center of Flynn’s guilty plea that the Justice Department moved to dismiss this month.

Ratcliffe has been deeply involved in questioning the FBI’s Russia investigation. He was one of the key lawmakers holding depositions during the House Republican probe in 2018 and was one of the first lawmakers to view the classified Foreign Intelligence Surveillance Act warrants on Trump adviser Carter Page.

Ratcliffe has focused most of his attention on the FBI’s problems with the Page warrants, which were detailed in the Justice Department inspector general report released in December. But he’s said that the problems with the investigation go beyond what the report alleged — and suggested that the intelligence community could also be in the crosshairs of Attorney General William Barr’s investigation into the FBI’s Russia probe, beingled by US Attorney John Durham.

“I think folks at the FBI are horrified and dismayed by what’s in this report. And it’s only going to get worse, I think, by what John Durham finds, because he has the ability to go out and talk to the intelligence communities,” Ratcliffe said in a December Fox News interview after the inspector general report was released.

“What we have been told over and over again, the Trump-Russia investigation, beginning in July of 2016, when there’s very clearly evidence of activity before that that involves law enforcement and intelligence community assets,” Ratcliffe told Fox in February.

Much of Ratcliffe’s attacks on the Russia probe have been focused on FBI officials like former Director James Comey and problems with the opposition research dossier on Trump and Russia — as well as going after House Intelligence Chairman Adam Schiff, a California Democrat who leads the House’s oversight of the intelligence community Ratcliffe will now lead.

Asked at his confirmation hearing if he agreed that the intelligence community had “run amok,” Ratcliffe said he did not.

Ratcliffe testified before the Senate Intelligence Committee just days after the panel had released a bipartisan report affirming the 2017 Intelligence Community assessment that Russia interfered in the 2016 election with a goal of helping Trump win.

The assessment was notably at odds with Trump’s deep skepticism that Russia interfered — and the Republican House Intelligence Committee report from 2018 that questioned the intelligence community’s assessment that Russia preferred Trump in 2016.

Ratcliffe sought to walk a fine line between the two positions, agreeing that Russia interfered but declining repeatedly to weigh in on what Russia’s goals were.

“I was not on the committee at that time. I respect both committees, but I have not seen the underlying intelligence to tell me why there is a difference of opinion between the two committees,” Ratcliffe said.

Russian election interference will be a central part of Ratcliffe’s position heading into the 2020 election. It was a briefing on Russia’s intentions in 2020 that helped lead to the ouster of acting director of national intelligence Joseph Maguire’s earlier this year, which came ahead of Trump’s nomination of Ratcliffe and installing Grenell as acting spy chief.

Ratcliffe will also be in charge of the declassification of the Senate Intelligence Committee’s final installment of its three-year investigation into Russia election interference. The volume, which totals roughly 1,000 pages, details the committee’s counterintelligence investigation and contacts between Trump’s team and Russian officials during the election.

Both Warner and then-Senate Intelligence Chairman Richard Burr, who has since stepped down temporarily amid an FBI investigation into his stock trades, asked Ratcliffe to finish the redactions before the Senate’s August recess — and the fall election season.

“I will work with you to get that declassified as expeditiously as possible,” Ratcliffe said.

Ratcliffe was one of Trump’s most vocal defenders during last year’s House impeachment hearings, serving on both the House Intelligence and Judiciary Committees.

While Ratcliffe didn’t call for the outing of the whistleblower’s identity, other congressional Republicans — and Trump — pushed for it during the impeachment debate. Democrats and national security experts have raised concerns that the attacks on the whistleblower will have a chilling effect on future whistleblowers in the intelligence community.

At his confirmation hearing earlier this month, Ratcliffe argued that he wasn’t attacking the whistleblower, but rather was criticizing the Democrats’ rush to impeachment. He said he wanted to be clear “every whistleblower past, present, and future will enjoy every protection under the law.”

“My issue was not with the whistleblower; my issue was with what I perceived as a lack of due process in the House process,” Ratcliffe said. “I don’t want to re-litigate the issue so I will leave it at that, but every whistleblower can expect full protection under the law.”

Asked if Trump’s comments on the intelligence community hurt morale there, Ratcliffe told the Senate panel that he hoped they did not, but his goal was not going to be to fight old battles.

“I think the sentiment that I have heard from the President is it’s not intelligence community writ large, it is specific individuals and pointing to, you know, for instance, misuse of intelligence authorities by certain individuals,” Ratcliffe said. “But again, my focus is I want to look forward, not back. I think that is one of the reasons I want this opportunity.”