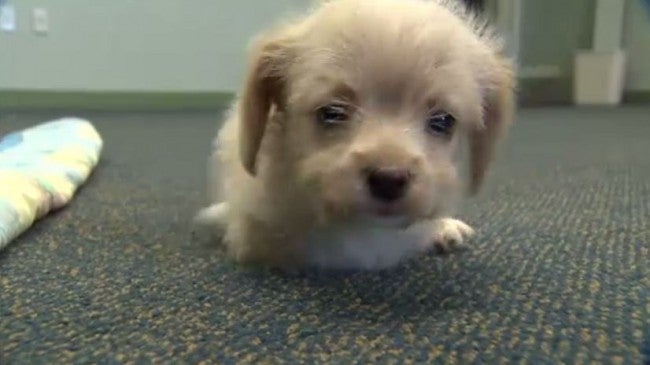 His name is Tumbles. The pup’s owner says the little guy will soon have help getting around, thanks to a 3D printer.

Pilchers says she’s been rescuing dogs for 32 years and she’s never had one without two legs before. She says she felt if she didn’t rescue Tumbles, no one would.

“Many places and many people would have put this dog down,” she said.

But thanks to what’s happening inside a 3D printer, Tumbles won’t be scooching his way across the floor much longer.

“This is the first functional prosthetic we’ve done using this printer,” Jollick explained.

The “sled,” as he calls it, comes from the mind of Brad Reed.

“I ended up drawing this from scratch,” Reed said.

It will take five hours for the high-tech scanner to lay down the microscopic plastic beads that will form the wheels and the axle. It will take another eight hours to build a U-shaped harness.

“The trickiest part is getting the dog to use it,” Jollick said.

The sled will allow Tumbles to lay on the breast plate. His back legs will push the wheel in front.

This was the first prototype for Tumbles. It was too big. The next one is smaller. When it’s done he will be able to walk and eat, and when these Velcro bands come off he can sleep like a normal puppy.

Tumbles is ready to start a new life.

“He’s going to get around a lot better,” Pilchers said.