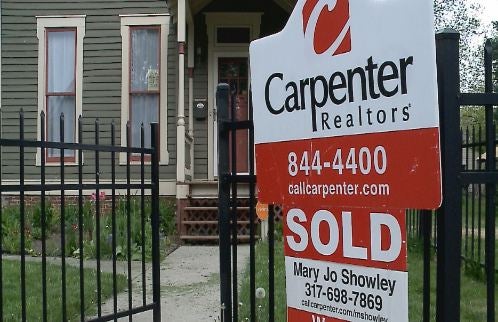 INDIANAPOLIS (WISH) – Real estate agents say the housing market in and around downtown Indianapolis is booming in a way they have not seen since before the housing crisis.

24-Hour News 8 spoke with the Metropolitan Indianapolis Board of Realtors about the hottest neighborhoods in Indianapolis this year.

One agent said the fastest growing neighborhood in Indianapolis is the Holy Cross neighborhood just east of downtown Indianapolis. A few years ago, the area off New York Street wasn’t on anyone’s radar. Many of the houses were rundown or vacant. But now buyers are now craving an urban lifestyle, and moving to historic districts. Not just in Holy Cross, but all across the city.

Mary Joe Showley has been a real estate agent in Indianapolis since 1986. She used to live in the Herron Morton neighborhood back in the 1960s. Showley remembers the area being very rough at that time. Now, she’s seeing a complete turnaround.

“The house was on the market when the boom went down, and we couldn’t sell it. For anything,” said real estate agent Mary Jo Showley.

The home sat on the market for more than two years before the owners gave up and leased it. When they tried again this year and put it back on the market Showley had 32 showings in 13 days. Showley sold the home for $249,000. She said that’s no longer unusual.

“It happened about a month ago. I mean, one week I had four offers on listings,” said Showely, ” The homes spend days on the market. Under 30 days, many of them.”

“A condo was on the market one day and it sold.  And then that person bought another listing that I had down the street,” said Showley.

“This market is being driven, just like everybody predicted, with the millennials followed by the baby boomers,” said Showley.

Showley says the demand for downtown housing is so high, rents cost more than mortgages.

“Interest rates are lowest in 40 years. It doesn’t make any sense, unless you absolutely cannot buy,” said Showley.

So millennials are opting to buy homes in historic neighborhoods.

Daniel Tolliver owns D.A.T. Painting and Wall Coverings. His business is reaping the benefit of the boom in historic housing.

“That first week we had warm weather phones started ringing off the hook,” said Tolliver.

Tolliver and others like him are bringing vacant or rundown homes back to life.

With each home, once-forgotten neighborhoods make their comeback. Neither Tolliver nor Showley see the growth stopping anytime soon.