New Mexico couple gets back wedding rings lost since 1960s 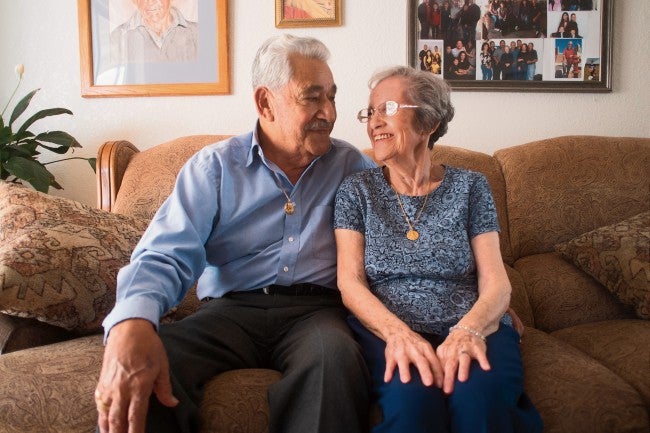 LAS CRUCES, N.M. (AP) – It’s been decades since Ofelia Kirker lost her wedding rings, but she’ll be wearing the treasured jewelry for her 64th wedding anniversary.

“It feels like we’re getting married again,” said her 83-year-old husband Robert Kirker.

It’s “unbelievable to be wearing them again,” said Ofelia Kirker, 82. “They had been gone for so long. It’s wonderful to have them back.”

She believes the rings tumbled out of her pocket in the 1960s while she was living in the Grant County village of Santa Clara, reports the Las Cruces Sun-News.

They were unearthed in a yard there years ago and have finally made their way back to her thanks to an observant yard worker, one woman’s sharp memory and her daughter’s persistence.

Kirker had a habit of taking the matching white gold and diamond rings off and wrapping them in tissues while she cooked, placing the tissues in her pocket. “I said be more careful with your rings or you’ll lose them,” said her husband, Robert Kirker.

And then she lost them. She remembered having them in her pocket at church and suspected they had fallen near the home of Romana Gutierrez, where the couple always parked before celebrating Sunday Mass.

In a panic, Kirker went to Gutierrez’s house and began searching in the dirt.

“Mrs. Gutierrez came up to her and said, ‘What are you doing, Mrs. Kirker?'” Robert Kirker. “Ofelia told her that she lost her wedding rings, and Mrs. Gutierrez said, ‘Well, good luck. I hope you find them.’ “

She never did, and she never replaced the rings.

Gutierrez’s daughter, Edna Salas, said the rings were unearthed years later when Gutierrez hired someone to clean her yard.

By that time, the Kirkers had left Santa Clara. Gutierrez didn’t know how to reach them, said Salas, so she put the jewelry in a small blue box.

Salas found that box in April.

“It puzzled me because I knew they weren’t my mom’s rings,” she said. “So I got on the phone, and I called my mom and asked her about the rings. She said those wedding rings belong to Ofelia Kirker.”

She passed the box on to the Kirkers’ daughter-in-law, who worked at a local grocery store. The bewildered daughter-in-law knew nothing about the rings and called the older couple.

“We were all surprised when we got the call,” Robert Kirker said. But he was skeptical that the rings were actually be theirs until the daughter-in-law described them.

So the Kirkers travelled to Santa Clara to reclaim the rings and meet Edna.

“It’s miracle,” Robert Kirker said. “We’ve had share of our ups and down, but this is uplifting.”

The couple lost an infant daughter in a house fire and, later, a granddaughter and great-grandson in a 2012 car crash.

Salas said her mother, who is now 90, was happy for the Kirkers.

“She closed her eyes and just smiled. So was so pleased they were finally turned over to their rightful owner,” Salas said.

“I’ve got to be real careful with them now,” said Kirker, who will be celebrating her 64th wedding anniversary in December.