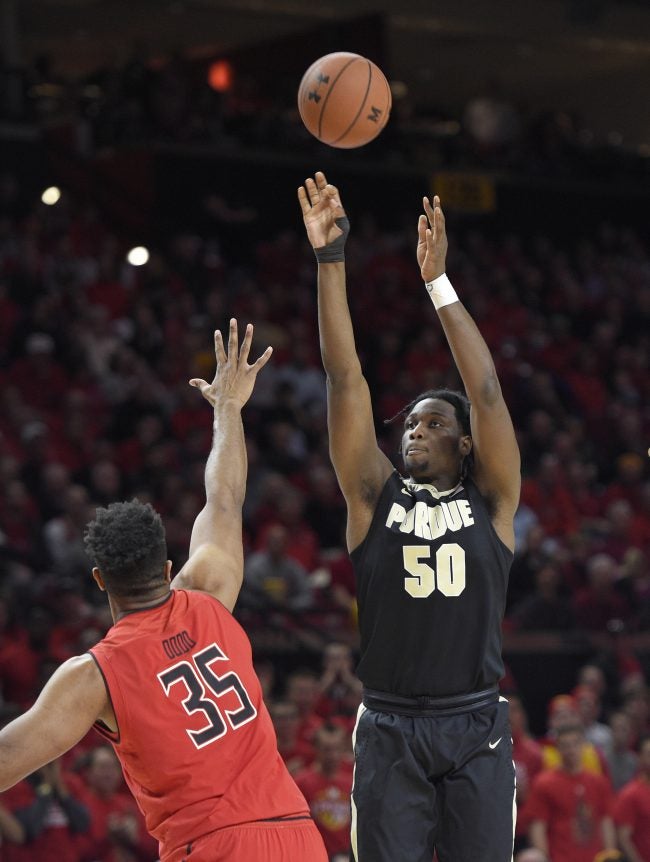 After celebrating contrasting victories over two ranked teams, the Boilermakers are poised to make a significant move in the Top 25.

Carsen Edwards made two free throws with 2.1 seconds left, and No. 23 Purdue rallied to beat No. 17 Maryland 73-72 on Saturday and knock the Terrapins out of first place in the Big Ten.

Four days earlier, the Boilermakers blew out No. 25 Northwestern at home.

“It’s huge,” Purdue coach Matt Painter said. “Obviously for us to get two Top 25 wins this week is key.”

Caleb Swanigan scored 26 points for the Boilermakers (19-5, 8-3), who are off to their best start in the conference since 2010-11. They have won five of six, none bigger than this one, especially since Purdue trailed by 12 points in the second half.

After Melo Trimble missed a jumper for Maryland with 7 seconds left, the Boilermakers got the rebound, took the ball down court and called a timeout to set up a play. Edwards took the inbounds pass on the side, dribbled around the key and was fouled on a drive to the basket.

After the guard calmly made both shots, the lengthy inbounds pass was caught by Purdue center Isaac Haas near midcourt. He was called for traveling, and Maryland’s last gasp went awry when freshman Kevin Huerter hit the rim on a jumper from the corner.

That left Purdue to toast its first road win over a ranked opponent since 2013. The Boilermakers came in with the second-best shooting percentage in Big Ten play, but in this one they shot 38 percent and went 9 for 22 on 3-point attempts.

“They were great defensively and we couldn’t make a jump shot,” Maryland coach, Mark Turgeon said.

Trimble scored 22, going 4 for 15 from the field and 14 for 15 at the line. The loss ended the Terrapins’ seven-game winning streak and dropped them into second place in the conference behind Wisconsin, which plays on Sunday.

“They executed at a high level and we missed a lot of shots,” center Damonte Dodd said.

Maryland has won nine games this season by six points or fewer, but this one went the other way.

“We’re used to winning close games. We’re not used to losing them,” Turgeon said. “Today we just couldn’t get that last stop.”

“I thought that was the game right there because we were just bad defensively,” Painter said.

The Boilermakers then peeled off 11 straight points, including two 3s by Ryan Cline, to close to 52-51. Minutes later, Swanigan made a 3-pointer and Dakota Mathias sank two free throws to put Purdue up 60-58.

Trimble then scored the game’s next seven points, all at the free throw line, including a technical foul shot after Haas complained about a blocking call at the baseline.

The Terrapins led 70-69 when Swanigan fouled out with 56 seconds remaining after getting tangled up with Trimble. The junior guard made both free throws, but Haas hit two on the other end to set up the dramatic finish.

“They’re hurting in there right now because we played well enough to win,” Turgeon said of his players. “We were just one possession away.”