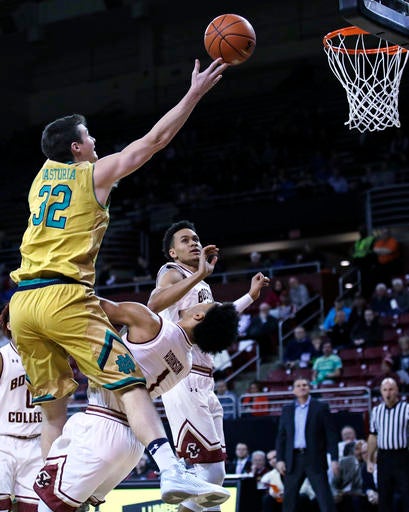 BOSTON (AP) – Bonzie Colson scored 20 points, Matt Farrell had 19 and No. 25 Notre Dame overcame a 13-point first-half deficit for an 84-76 victory over Boston College on Tuesday night, sending the Eagles to their 10th straight loss.

BC had sliced it to 78-76 on Bowman’s two free throws with just under a minute to play, but Beachem grabbed an offensive rebound and was fouled on the ensuing possession. He hit both free throws with 24.1 seconds to play.

The Fighting Irish trailed by 10 points early in the second half before outscoring BC 21-3 over a 4:50 span.

Consecutive 3s from Farrell 29 seconds apart tied it at 59 before Colson’s putback jam on their next possession gave them their first lead of the game with just under 13 minutes to play.

Notre Dame: The Fighting Irish need to take advantage of a softer portion of their schedule – with games coming up against North Carolina State, Georgia Tech and another with BC to have a chance to make a run to the top of the ACC.

Boston College: Like a number of games this season, the Eagles showed spunk but couldn’t close out a win. With leading scorer Jerome Robinson (19.4) struggling down the stretch, they really looked challenged offensively. He finished with 11 points on 3-of-12 shooting.