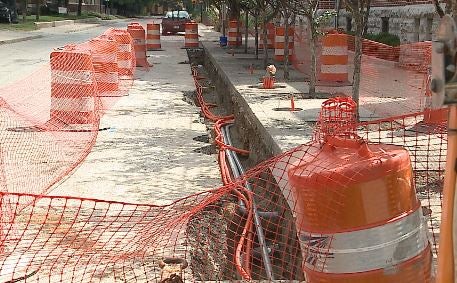 INDIANAPOLIS (WISH) — People living in the Old Northside neighborhood have concerns with a BlueIndy charging station.

The charging station in question is being built right outside their window on 13th Street and Alabama Street.

The car sharing program is set to begin next week but the residents are hoping to stop it, saying they were never told it was going to be built.

“This morning as we were walking to our car, my daughter and I heard two people on bicycles say, ‘it’s a nice neighborhood,'” said Mariana Snyder, who lives near the intersection. “And were like, how sad, yes it was. It was.”

Construction on the charging station started a few days ago. They’re now circulating a Change.org petition.

“It’s not a downtown area. It’s an historical, beautiful area and this is what these people decided to bring to our neighborhood,” said Snyder.

“When you have to fight for parking, it’s ridiculous,” said Markise Smith, who says he and his wife are considering moving because of the station.

“We had no idea, no one had any idea,” said Teresa Webster, the owner of Repeal, a newly-opened restaurant in the Fletcher Place neighborhood.

Finding parking near the restaurant is a luxury. Webster says the charging station located across the street is making parking even worse.

“If we had been able to speak up about it we might have suggested, as business owners, and even as residents, some other places that would’ve been better for them to put it,” said Webster.

“If we had gotten more information, gone through the deliberative process, we could’ve really had a conversation and engaged the community a little bit and the public could’ve been involved in that process, said City County Councilor Zach Adamson (D), a frequent critic of the program.

BlueIndy said today they were in communication with community leaders before building the stations, and says they were chosen based on population density, and proximity to businesses.

Council members say it comes down to lack of communication.

Mayor Ballard’s office did not respond to an email regarding the program.

BlueIndy is set to launch on Tuesday, September 1.