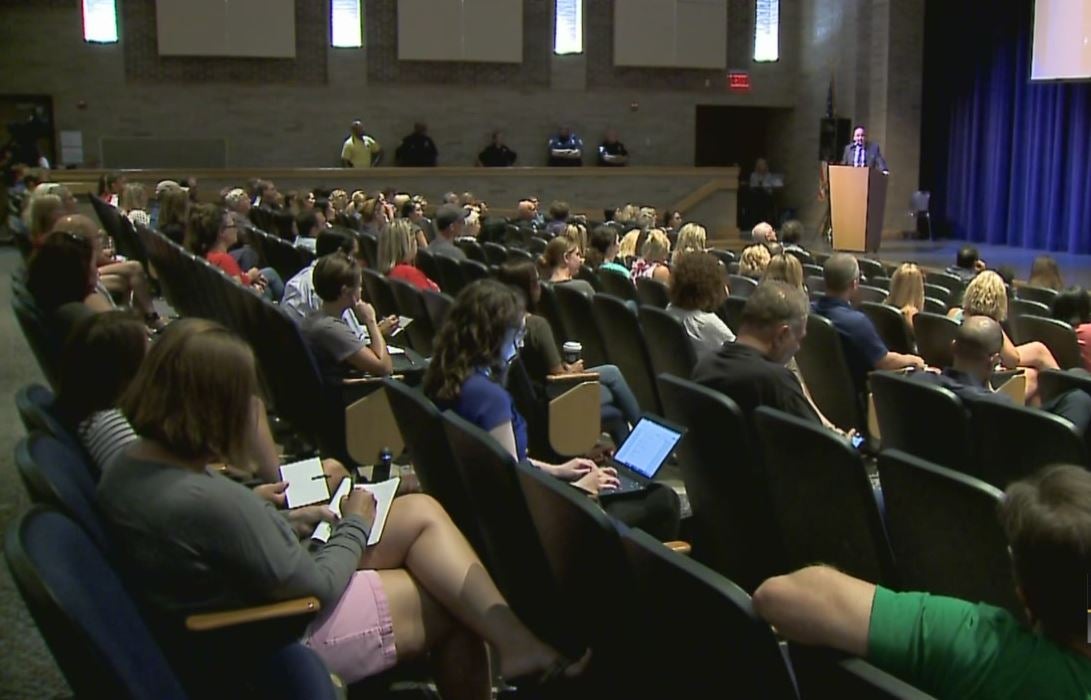 CARMEL, Ind. (WISH) — With less than a week until school gets underway in the Carmel Clay School District, school officials are looking to ease the minds of concerned parents ahead of the new year by holding a school safety forum.

The safety forum was the first for the district since 2012, after the Sandy Hook school shooting.

Wednesday’s meeting was held in direct response to the Noblesville West Middle School shooting in May.

The overall goal; to not only outline what the district is already doing, but more importantly outline changes the district will make to keep students safe.

“When there’s violence in a school it affects every parent,” said Carmel Clay Superintendent Dr. Michael Beresford. “It affects every educator and it shakes you to your core.”

Addressing that fear is exactly what Carmel School administrators and police are looking to achieve as over 100 Carmel parents attended Wednesday’s safety forum inside the auditorium at Carmel Middle School.

A panel made up of six people including district officials and police, outlined current safety practices and changes that will be made to keep the district safe.

During the meeting, parents learned the district is looking to expand its anonymous alert system to a two-way communication format.

Beresford also announced construction will begin in the near future to secure school entrance lobbies at various schools in the district.

The meeting also aimed to pull back the curtain on Carmel Clay Schools safety plan. It’s called A.L.I.C.E., which stands for alert, lockdown, inform, counter and evacuate. The plan was used in the Noblesville shooting.

It’s this transparency that both sides hope will create more open lines of communication.

For parents like Alexa Griffith, who had two kids at Noblesville West during the shooting in May, meetings like this one are crucial.

“They have a lot of nervous feelings about it,” Griffith explained. “They are very much worried about the first intruder drill. Because the last intruder noises they heard it was a real thing. So, we are just making sure we can get in on the front of this so I can go home and tell my children these are the steps that your new school has in place to keep you safe.”

The Carmel Clay School District also announced at Wednesday’s meeting it did receive 30 metal detectors through a state grant.

However, the district has not decided exactly when and how often to use them.