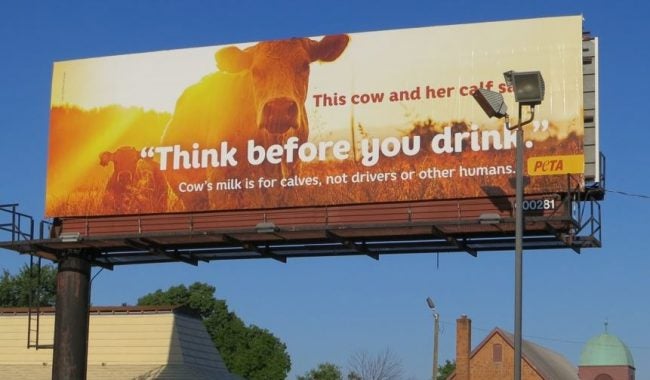 INDIANAPOLIS (WISH) — Not everyone is excited for “the world’s largest milk toast” planned for the 100th Indianapolis 500.

People for the Ethical Treatment of Animals (PETA) has placed a billboard in downtown Indianapolis decrying the race’s iconic milk-drinking tradition.

“This cow and her calf say: ‘Think before you drink.’ Cow’s milk is for calves, not drivers or other humans,” the billboard announces against the backdrop of two cows.

Prairie Farms and the Indiana American Dairy Association will provide 100,000 bottles of milk for spectators to drink as Sunday’s race winner takes a swig. Since 1936, every Indy 500 champion has been given a bottle of milk in Victory Lane.

“Wasting gallons of milk from loving mother cows is the pits,” PETA President Ingrid Newkirk said in a press release. “PETA’s billboard is a reminder to race fans and drivers that the dairy industry is a cruel business.”