Police: Man set wife on fire, drove head-on into semi on I-65 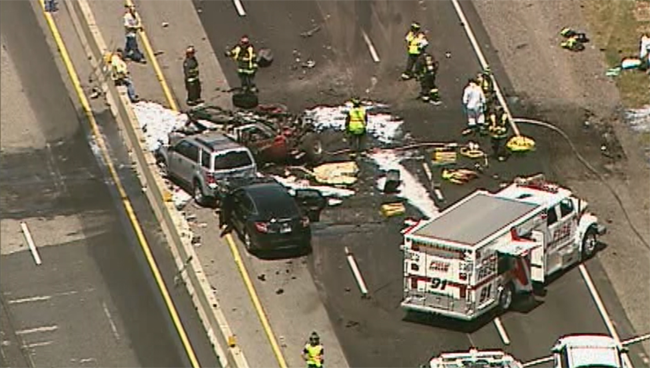 GREENWOOD, Ind. (WISH) – A man set his estranged wife on fire before crashing head-on into a semi on I-65 near Greenwood, killing himself and injuring another person Friday afternoon, according to police.

Donn Keever threw gas on his estranged wife, Amy Keever, and lit her on fire in the 100 block of Highland Avenue in Franklin, according to Franklin police. A friend tells 24-Hour News 8 that at least two of Donn and Amy’s three kids witnessed the incident.

Amy Keever had serious burns over a large portion of her body and was taken to Sidney & Lois Eskenazi Hospital in Indianapolis. She is “fighting for her life,” according to a friend. As of 7 p.m., hospital officials say she is in the emergency department in critical condition.

Shortly after setting his wife on fire, police say Donn Keever was speeding south on I-65 while in the northbound lane. The area is under construction and has three lanes traveling northbound with a concrete median barrier separating the southbound traffic.

Investigators said Keever abruptly turned into the path of a northbound semi, causing a head-on crash. The semi flipped onto its side.

Keever then continued south, struck a Ford Escape and the concrete barrier before his truck erupted into flames. Keever was trapped in the vehicle and died of his injuries.

The driver of the Ford Escape, 47-year-old Donald Whitney, was transported to IU Health Methodist Hospital with non-life threatening injuries.

The semi driver, 50-year-old Toby Klar, was not injured.

Two more vehicles were involved, but no one was hurt.

A friend tells 24-Hour News 8 that Amy works at Caterpillar and the couple was going through a divorce. The friend says Donn would come over periodically to pick up the kids, but there was no indication that he was violent.

A separate crash also occurred near the 85-mile marker, between Franklin and Edinburgh.

According to the Johnson County Sheriff’s Office, a driver dropped his cigarette and struck a construction barrier while attempting to pick it up.

In an unrelated incident, five people died in an overnight crash on I-65 in Tippecanoe County. Click here for more on it.