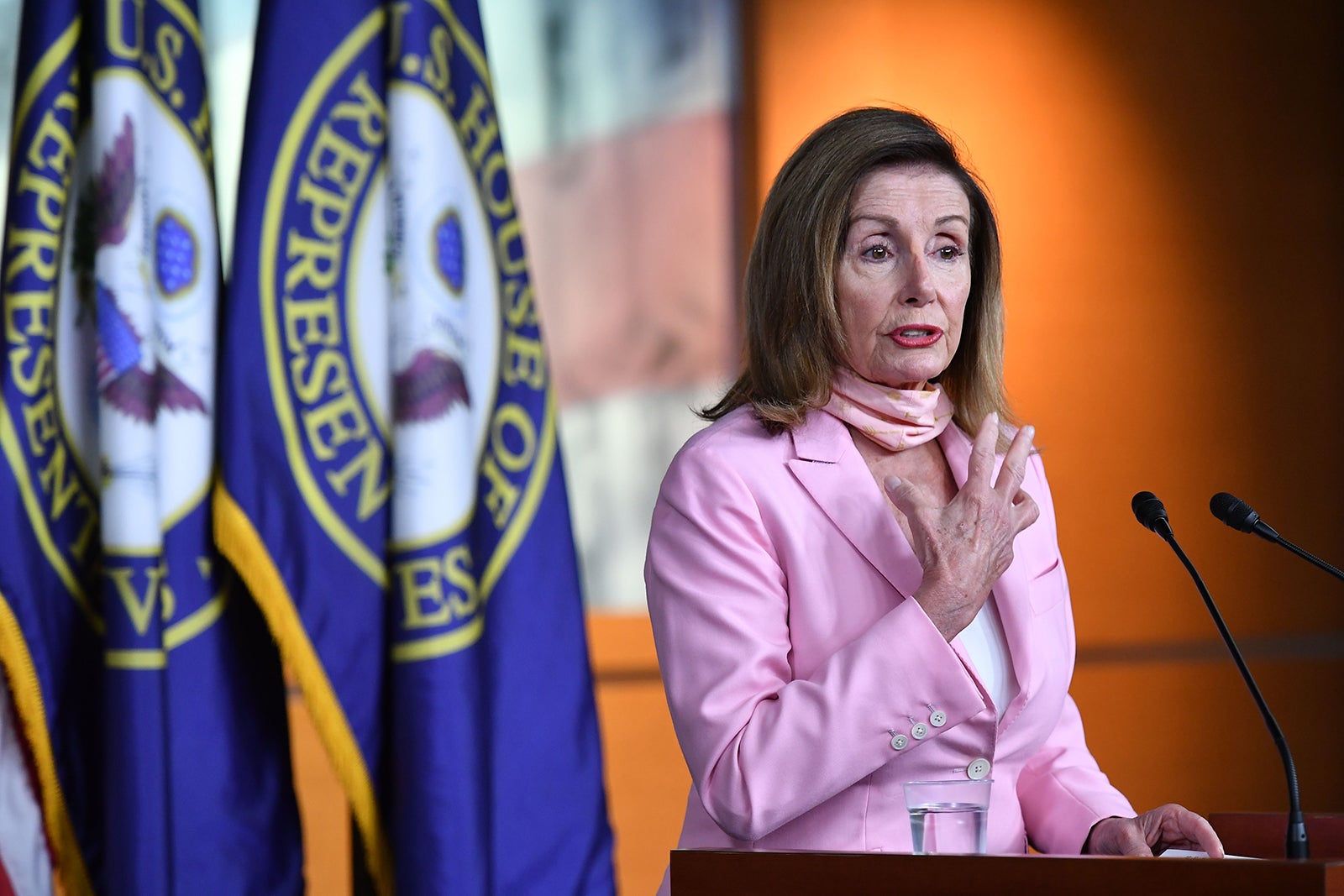 (CNN) — House Speaker Nancy Pelosi rejected the possibility of a short-term extension of federal jobless benefits during her news conference on Thursday, taking a hard line in demanding that Congress approve a large-scale stimulus package that the White House has so far rejected.

“We’re not having a short-term extension,” Pelosi said when asked if Democrats are ruling out an interim extension of the lapsed federal unemployment enhancement if talks collapse, a signal that restoring the benefit will be contingent on the White House and Democrats cutting a broader deal, which so far remains elusive with White House chief of staff Mark Meadows saying recently that the two sides are “trillions of dollars apart.”

The federal enhanced benefit program was set up to provide an additional $600 a week to individuals receiving regular state unemployment benefits and was meant as an added boost to help blunt the economic fallout from the pandemic. It has now expired, however, as negotiators remain at an impasse over disagreements over the scope, scale and details of a new stimulus measure, sparking fears that a deal may not be reached at all.

Pelosi on Thursday indicated no willingness to back off the demand for restoring the benefits to the level of $600 a week. “We have said that we are going to have the $600,” she said, adding, “They know that we want the $600.”

“Why dismantle a program that almost all economists say is working and put something new in its place that will take months to go into effect?” asked Senate Democratic leader Chuck Schumer, who joined Pelosi at her presser.

Democrats have called for a comprehensive agreement and indicated they do not want to take a piecemeal approach to negotiations over a new stimulus. Republicans have accused Democrats of acting in bad faith as they deal with internal divides within their own party. Complicating efforts to strike any deal: a significant number of GOP senators hesitant to back any deal with a massive price tag after Congress has already approved trillions of dollars in coronavirus relief.

“As you can see the Democrats in the Congress are unified,” Pelosi said, “At the same time, Republicans are in disarray.”

Senate Majority Leader Mitch McConnell announced on the Senate floor that he won’t adjourn the Senate for the August recess Thursday, as has been previously scheduled, as negotiations over the next Covid-19 response stimulus package limp forward. He did say senators can return home and will be given 24 hours’ notice to return for a vote on a deal if it is reached and that he would stay in DC as the talks continue.

The speaker sounded skeptical and dismissive when a reporter asked about possibility that President Donald Trump could take executive action if there’s no stimulus deal with lawmakers.

“And what is he going to act upon?” Pelosi asked. “I don’t think they know what they’re talking about. The one thing the President can do is extend the moratorium and that would be a good thing if there’s money to go with it and that’s what we keep telling them.”

Pelosi was later asked if she thinks the administration could move money around without congressional approval.

“They can’t move that much money, we’re talking about a major investment,” she said.

As negotiations continue, a number of issues have emerged as sticking points, including how to address the lapsed unemployment benefits. Funding for the US Postal Service has also become a major issue in the talks.

Schumer provided insight into his demands of Postmaster General Louis DeJoy after their heated meeting on Wednesday in Pelosi’s office. Schumer told CNN that they are demanding that all 100% of mail-in ballots be delivered by Election Day. And also on Wednesday, Schumer said that the responses they got were “inadequate.”

In the Thursday interview, Schumer said at the meeting they called on DeJoy “to pull back on these cutbacks on overtime and employees, so all the mail can be delivered on time on Election Day. Not 94% or 97%.”

Asked if DeJoy told Democratic leaders the USPS wouldn’t be able to guarantee 100% would be delivered, Schumer said: “I don’t want to say what they said, but we pushed it. It’s gotta be 100%, not 94 not 97.”

Schumer, asked if $10 billion would be sufficient to help with their budget woes, added: “We’ll figure out what they need. We don’t fully trust them — with everything Trump has said about the Post Office — and their Trump appointees.”