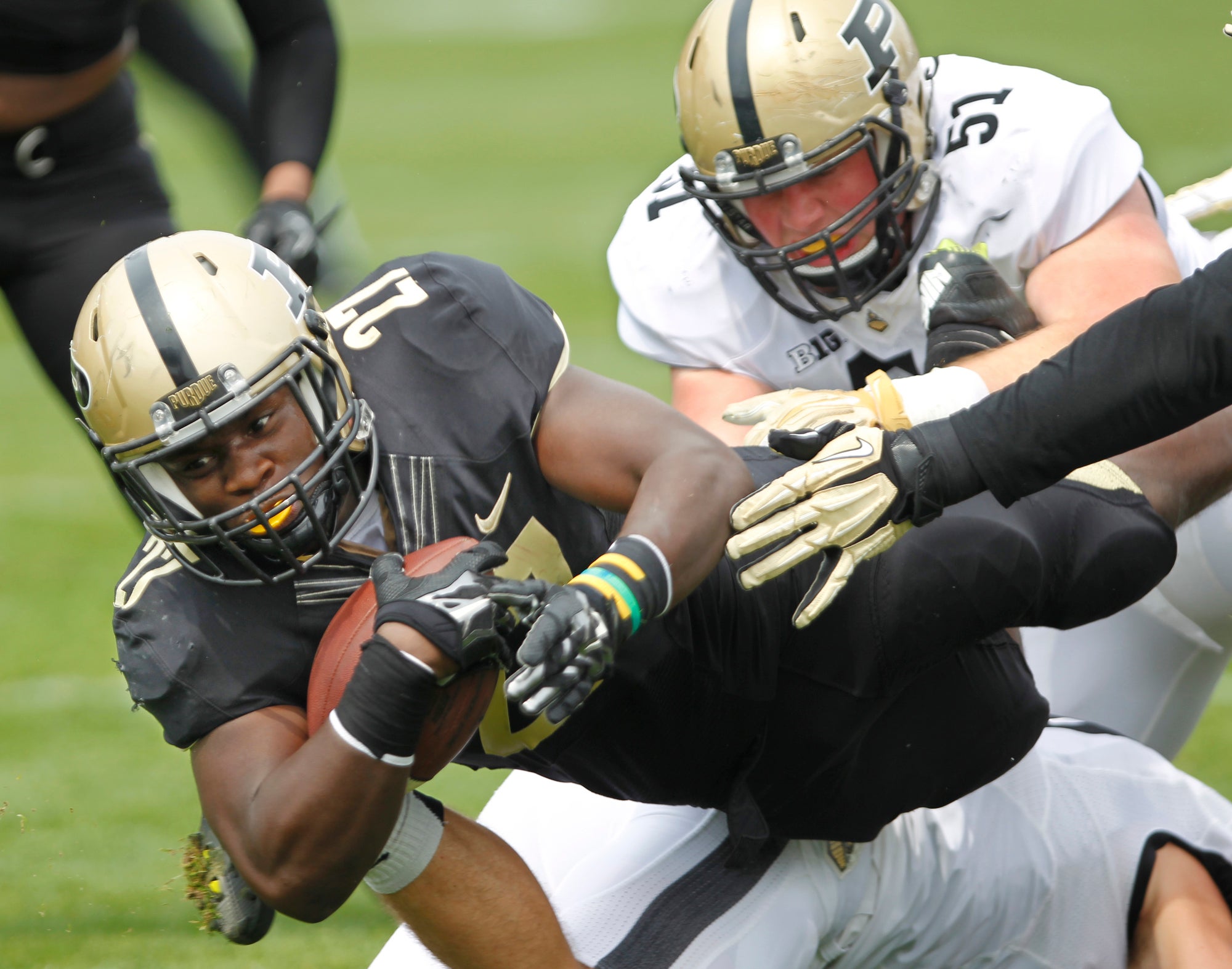 WEST LAFAYYETTE, Ind. (AP) – If nothing else, Purdue junior Austin Appleby has learned that those who play quarterback for a Big Ten Conference program must have a short memory.

On Sept. 6 in a 41-31, season-opening loss at Marshall, Appleby was intercepted four times, two of which were returned for touchdowns. Throughout the week, some Boilermaker fans turned to social media to vent their frustrations, hoping coach Darrell Hazell would replace Appleby with redshirt freshman David Blough.

Appleby kept his job and threw four touchdown passes Saturday, including three of 50 yards or more during the first half, leading Purdue to a 38-14 victory against FCS opponent Indiana State.

Appleby redeemed himself against the Sycamores (1-1), completing 12 of 18 passes for 234 yards and the aforementioned three TDs during the first 30 minutes, helping Purdue (1-1) snap a seven-game losing streak, all seven of which were games Appleby started.

“I try to trust in my process and the things I can control, which are effort, attitude and the way I go about my business,” Appleby said. “We had a lot of great things that we did last week, and we wanted to focus on the positives.”

The junior finished 20 of 34 for 289 yards, becoming the first Purdue quarterback to throw four TD passes in a game since Danny Etling in 2013 in a loss at Indiana.

A Purdue quarterback had not thrown three or more touchdown passes of at least 50 yards each since Billy Dicken threw TD passes of 65, 89 and 93 yards in a 59-43 victory in 1997 against Minnesota.

“I’m proud of him,” Hazell said of Appleby. “That was a hard game last week. He showed some toughness this week, both mentally and physically. He took a couple of hits, but I’m proud of the way he bounced back and made some good throws for us.”

Appleby, who had been intercepted 11 times during Purdue’s five most recent games, began his assault on the Sycamores’ secondary on the fourth play from scrimmage, throwing a 57-yard touchdown pass to wide receiver Cameron Posey, giving the Boilermakers a 7-0 lead.

Appleby’s 50-yard TD pass to wide receiver DeAngelo Yancey with 26 seconds remaining in the first quarter capped a 6-play, 70-yard drive and increased the lead to 14-0.

“Part of my development is the ability to wipe it clean and answer with a touchdown drive,” Appleby said, “If I’m the one leading this offense, I can’t get gun shy. I have to practice what I preach and keep my foot on the pedal. I am not going to flinch.”

Indiana State, ranked 21st in this week’s FCS Coaches Poll, took advantage of a short Purdue punt to pull within 14-7 with 9:34 left in the second quarter, getting a 17-yard touchdown pass from Matt Adam to wide receiver Gary Owens.

Paul Griggs’ 19-yard field goal with 2:40 remaining in the first half increased Purdue’s lead to 17-7, and then on the first half’s final play, Appleby threw a 51-yard touchdown pass to Dan Monteroso, who caught the Hail-Mary attempt in the back of the end zone.

Freshman running back Markell Jones’ 1-yard touchdown with 1:10 remaining in the third quarter increased the Boilermakers’ lead to 31-14, a drive which was extended when defensive back Anthony Brown ran 39 yards on a fake punt.

Appleby’s fourth TD pass – a 5-yarder to Jones with 6:24 left in the game – completed the scoring.

“I look at it very simple – we did not play well enough to win or anything like what our expectation is,”Indiana State coach Mike Sanford said. “Our plan to win is to play great defense. We gave up way too many big plays, and Purdue beat us in all three areas – offense, defense and special teams.”

The victory in Ross-Ade Stadium was Purdue’s first in West Lafayette since Sept. 20, 2014 when the Boilermakers defeated FCS opponent Southern Illinois. Purdue is 5-0 all-time against Indiana State, including a 20-14 victory in 2013.