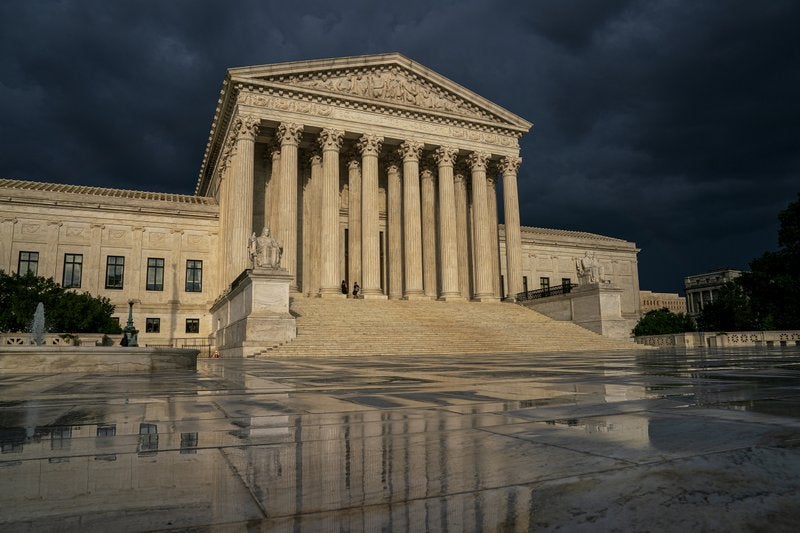 FILE - In this June 20, 2019 file photo, the Supreme Court is seen under stormy skies in Washington. Two issues that could determine the distribution of political power for the next decade await resolution on the Supreme Court's final day of decisions before a long summer break. Chief Justice John Roberts could well be the author of decisions on both politically charged topics Thursday, June 27, whether to allow a citizenship question on the 2020 census and place limits on drawing electoral districts for partisan gain. (AP Photo/J. Scott Applewhite, File)
by:
Posted: Jun 27, 2019 / 12:09 PM EST / Updated: Jun 27, 2019 / 04:04 PM EST

WASHINGTON (AP) — The Supreme Court says federal courts have no role to play in policing political districts drawn for partisan gain. The decision could embolden political line-drawing for partisan gain when state lawmakers undertake the next round of redistricting following the 2020 census.

The justices said by a 5-4 vote Thursday that claims of partisan gerrymandering do not belong in federal court. The court’s conservative, Republican-appointed majority says that voters and elected officials should be the arbiters of what is a political dispute.

The court rejected challenges to Republican-drawn congressional districts in North Carolina and a Democratic district in Maryland.