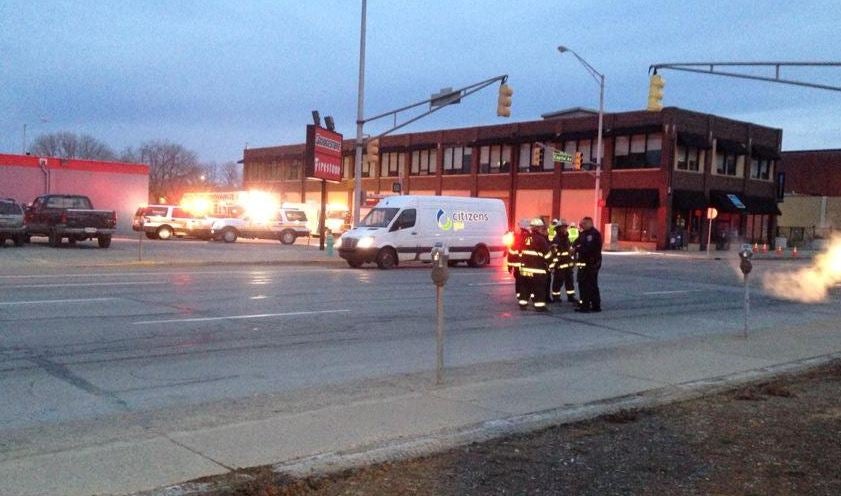 According to IPL, the first indication of a problem came into its control center at 6:34 a.m. but there was no information on the location of the issue.

It wasn’t until a call at 6:48 from IFD about smoke coming out of a manhole cover at Capitol and North Streets that they were able to pinpoint the area.

“Found out we actually had this electrical short circuit that was happening on the 120 volt cables here in the street,” said Joe Bentley, Senior Vice President of Customer Operations for IPL.

The short ultimately caused an underground fire and sent the manhole cover at North and Capitol by Deering Cleaners exploding into the air.

Chopper 8 caught the explosions as it happened live.

“A second manhole a block east on North Street was also affected, while two others in an alley on Roanoke just north of Michigan Street were slightly dislodged,” IPL said.

“We’re also seeing some damage – there’s two transformer vaults that there’s some damage on the secondary bus in those vaults as well and so there was some smoke that came out of those,” said Mike Holtsclaw, director of engineering for IPL.

Power to the immediate area was quickly shut down but a short time later further action was taken.

“And so what we did was drop a bigger area from about North Street on the north, West (Street) to the west, over to Pennsylvania and down to New York to ensure that we didn’t have any further damage and spread of damage to the cables,” Bentley said.

Some portions of downtown could remain without power until Friday because of the extensive damage, according to IPL.

IFD said the building had enough residual carbon monoxide to keep it unoccupied. IFD was trying to reach residents. A warehouse in the area was also evacuated.

One person was stuck in an elevator following the explosion. IFD responded and got them out safely.

Traffic in the area was shut down but two lanes of Capitol Avenue reopened around 9:20 a.m. Senate Avenue and North Street to Michigan Street was closed as of 8:45 a.m.

Several hours after the explosion, IPL provided the media with an explanation during a press conference.

This is the second time this week that an explosion has been reported. On Monday crews responded to the 400 block of Massachusetts Avenue for a reported underground explosion. However, an IPL spokesperson said the two incidents were very different.

“What we had at Mass Avenue was a 13,000 volt termination chamber that actually failed,” Bentley said. “This is actually a 120 volt cables that are actually in the street that caused the issue so completely unrelated, associated with that.”

Now IPL attention turns to determining what the root cause of the failure was and what it can learn from that to adapt its processes.

“If there is something that we learn that is unique from this event that says well we should change this aspect of our maintenance, our inspection cycle we will certainly take that information and make the necessary adjustments,” said IPL president, Kelly Huntington.

With the Final Four just a couple weeks away the city is concerned about the potential impact with tens of thousands of people in town to watch college basketball. IPL said safety is a top priority and they have additional inspections and extra staff for Final Four weekend.

24-Hour News 8’s Jim Shella caught up with Indianapolis Mayor Greg Ballard at the statehouse to get his reaction to Thursday’s explosions.

The mayor says the city is making sure IPL and others involved inspect the entire area as quickly as they can.

At least 13 other underground explosions have occurred in downtown Indianapolis over the last 10 years.