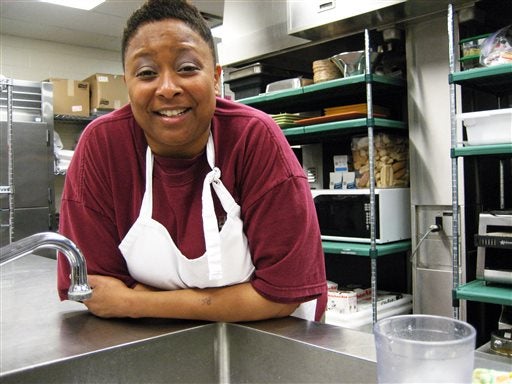 INDIANAPOLIS (WISH) — Friends are remembering a woman found dead on the north side of Indianapolis.

She was once the nation’s youngest death row inmate before having her sentenced reduced.

Paula Cooper was released from prison in 2013 after serving 27 years behind bars. She confessed to killing an elderly bible studies teacher in 1985 when she was 15.

The victim’s grandson, Bill Pelke, was able to forgive her. He even rallied to get her off of death row. Cooper’s sentencing attracted attention from everyone across the world, including the late Pope John Paul II.

Pelke’s grandmother was murdered 30 years ago and now he’s left mourning the loss of the woman who killed her.

A photo taken almost three years ago captured what some people are calling compassion, a growing friendship between Bill Pelke and the woman convicted of killing his 78-year-old grandmother.

“I loved Paula. I worked hard to help get her off of death row,” said Bill Pelke, victim’s grandson. “I have tried to do everything that I could do to try to help her because I feel that everything good that she would do in life would be a testament to my grandmother’s legacy.”

Pelke told 24-Hour News 8 via Skype on Wednesday evening that he kept in touch with Cooper during her time behind bars by visiting and writing letters. He said he had not seen her since her release from prison.

He was looking forward to meeting again once Cooper was to be released from parole next month.

“She did call me last July, so I only talked to her once she had been out,” said Pelke. “From all the reports I read, she had been doing really well.”

Pelke said he was excited for Cooper and her future. He last heard she was working at a restaurant and was up for a promotion, but that all came to an end Tuesday morning.

“I just kept looking at the computer saying ‘no, no, no,'” said Pelke.

According to a police report, the 45-year-old was found dead in the 9500 block of Angola Court from an apparent suicide.

Pelke said he remembered talking to Cooper about working with his organization and sharing her story with others through “Journey of Hope From Violence to Healing.”

“One of the real tragedies is that there were a lot of people really supportive of Paula Cooper, but Paula Cooper never had a chance to meet any of those people. I just wished she would have had a chance,” said Pelke.

The U.S. Supreme Court ruled in an unrelated case that anyone under 16 years old at the time of the offense could not receive the death penalty because it was cruel and unusual punishment.

Pelke said he was to forgive Cooper for the crime because he believes this is something his grandmother would have wanted.