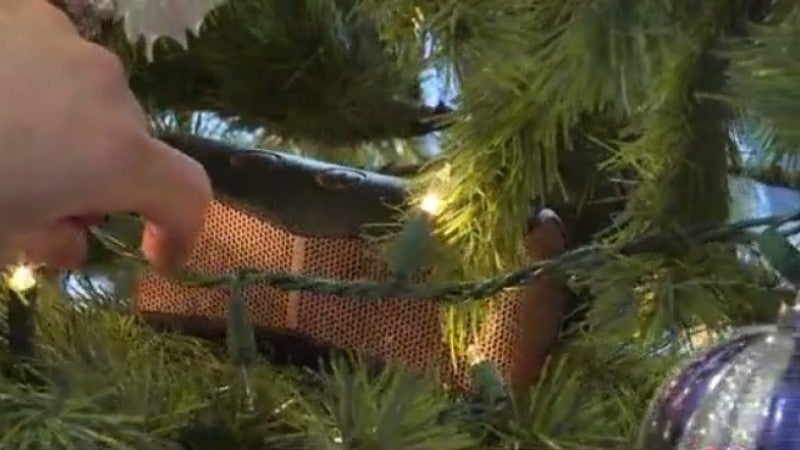 AVON, Ind. (WISH) — A brazen man made a trip to the police office into a chance to steal some Christmas joy.

It wasn’t anything too crazy, just one of those little Bluetooth speakers set up to bring some atmosphere to the lobby and only worth $45. But police say it’s not about what the man stole, but the blatant disrespect to the officers and the community.

The entire incident was caught on camera. The man entered the police station trying to get his impounded car back. It was his second time in after, police say, he didn’t bring all the forms he needed. While he waited, he took a look at the speaker that had been set up under the lobby chairs, placed it next to him in the seat, and on his way out, scooped it up making a quick exit, from the building, video shows.

“[The clerk] went to sync up to the speaker and there was no music,” Avon Police Chief Sean Stoops said. “So she thought something may have happened to the speaker, so she went out to check on it and it was gone.”

Since the man filled out paperwork and the room is heavily monitored, it was easy for police to figure out who he is: 43-year-old Quannah Gilbert. Police issued a warrant for Gilbert’s arrest, tracked him down Friday morning, and got their man and the missing speaker.

They still have no answer about why it happened.

“Something like this, a very inexpensive speaker, I don’t know,” Stoops said. “Only he knows the answer to that. One thing’s for certain: We’re not going to allow that to happen here.”

Avon police say this incident isn’t about the speaker, which is now in the department’s Christmas tree. Instead, it’s about one person making a safe place feel unsafe. So police say to anyone who would their safe community and work environment, they want this incident to be a message.

“We really want to send a strong message to anyone that might think about coming here and vandalizing, stealing, break our windows, tear up our monument, whatever it might be, we’re going to do everything we can to try and catch you,” Stoops said.

Police say Gilbert was booked into the Hendricks County Jail Friday morning and he’ll be there until he bonds out or his next court appearance, which police estimate will be Monday.