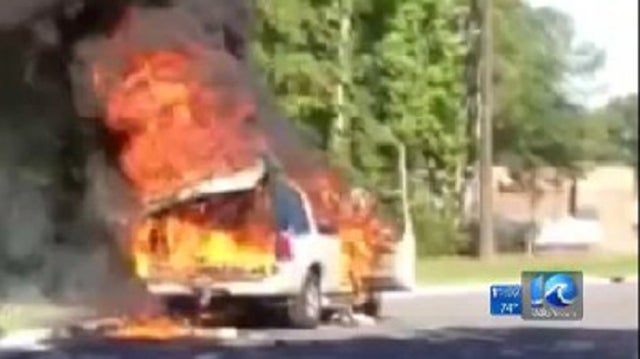 CHESAPEAKE, Va. (WAVY) – A quick-thinking deputy jumped into a burning car to save a dog and protect dozens of people nearby.

The car fire started around 10 a.m. Saturday at the Chesapeake City Park on Greenbrier Road. The park was packed with people attending an American Kennel Club dog show.

Dog owners and handlers showed up to the park in hopes of winning top prize, but it didn’t a judge to decide the true winners of the day.

“Due to their quick thinking and quick reaction, no lives nor dogs were lost,” said a dog show organizer.

Master Deputy Wayne Spencer was the first of four volunteer deputies to spot smoke coming from an SUV. In the back of the car was Lemon Chiffon, a 10-month-old English Mastiff show dog.

“It was brown smoke,” recalled Spencer. “It turned to black smoke. It got smokier and smokier.”

Chiffon’s owner Christina Neff was handling another dog in the ring when the fire started. She could see deputies frantically running from her vantage point.

Luckily, Spencer was able to reach into the car and pull the dog to safety. He then hopped in the car and quickly drove away from the crowd of more than 100 people as flames were shooting out of the glove box.

“Cars and vans and tents were all around the vehicle,” said Spencer. “There was a lot of people around here, too. It could have been a very nasty situation.”

The crowd recognized the four deputies for their bravery. The men are part of the Chesapeake Sheriff’s Office and serve for free to give back to the community.

“We’re too old to go back in the military and too old for Boy Scouts, so we do this,” said Spencer.

Chiffon went on to win top prize after being rescued. Neff says she’s forever indebted to Spencer for giving her beloved pet the opportunity to compete in another show.

A local car dealership is allowing the family to borrow a truck until they purchase a new one.