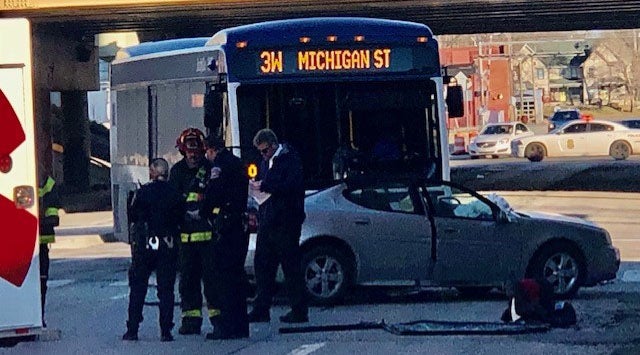 INDIANAPOLIS (WISH) — A woman died and a child and another person were hurt Wednesday afternoon when a car crashed into an IndyGo bus.

Indianapolis Metropolitan Police Department and medics were called just after 3 p.m. Wednesday to the crash at the intersection of East Michigan Street and North Davidson Street. That’s just west of I-65/I-70 downtown.

The woman who died after the crash in a hospital and the child who was hurt were in the car.

The child is stable, police said. The other person hurt was riding the bus; that person was also stable.

The woman killed has been identified by the Marion County Coroner’s Office as 54-year-old Cindy Evans.

Alcohol was not believed to be a factor in the crash.

“No further information regarding the nature of the crash will be released until video and witness statements are reviewed,” the news release said.

The release did not indicate how long it might take for the department’s fatal crash team to collect information.

The county coroner will determine the cause of the woman’s death and provided her name once proper next-of-kin notification has been made, IMPD said.

“IndyGo will continue to work with IMPD and follow internal protocol as this accident is investigated. Our condolences are with the families of those involved and we encourage all drivers to be attentive while on the road.”