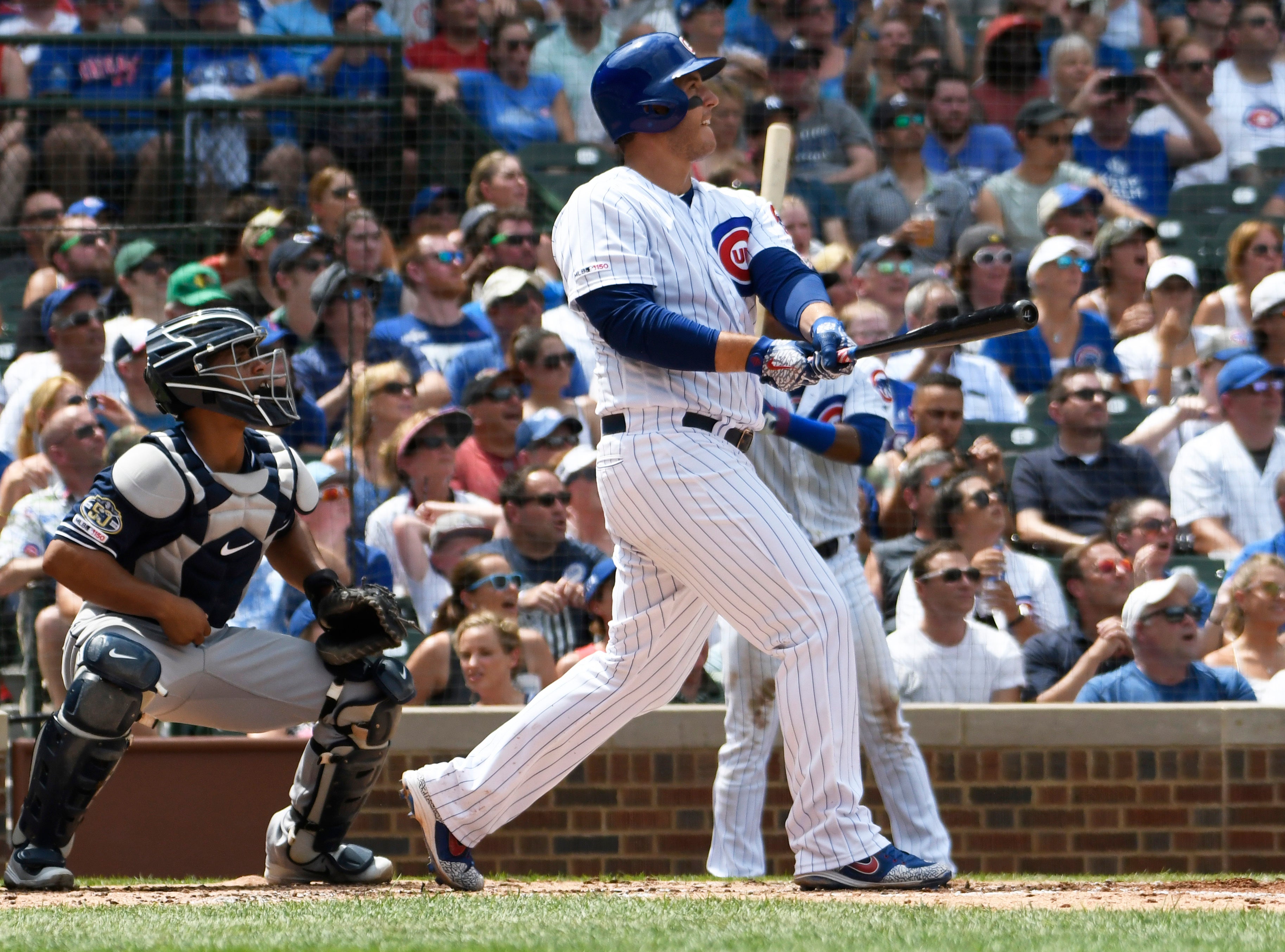 CHICAGO (AP) — Before Friday’s game against San Diego, 9-year-old Matteo Lambert of Vienna, Virginia, met Anthony Rizzo in the Chicago Cubs’ dugout and gave him a note asking for a “moonshot” on behalf of group running a 5K in Grant Park this weekend to raise money for kids with cancer.

Watch the Cubs vs. the Padres starting at 2 p.m. Saturday on WISH-TV.

Rizzo followed with a go-ahead grand slam, his first home run since June 15.

“That was for him,” Rizzo, a Hodgkin’s lymphoma survivor, said after the Cubs overcame a three-run deficit to beat the Padres 6-5. “That’s really special for him to come and hang out there.”

Javier Báez also homered for the NL Central-leading Cubs, who have won six of seven since the All-Star break. Chicago overcame an early home run by Manny Machado that built a 3-0 lead.

Josh Naylor tied the score 5-5 in the eighth inning against Pedro Strop (2-3) with his first career pinch homer, but the Cubs went back ahead in the bottom half.

Rizzo singled off Craig Stammen (6-5), rookie shortstop Fernandez Tatis Jr. threw Addison Russell’s grounder into center field for an error, Jason Heyward was intentionally walked and David Bote hit a grounder to third. Machado threw home for a forceout and catcher Francisco Mejia threw to first, even though he didn’t have a play on Bote. The ball hit off the glove of first baseman Eric Hosmer and bounced into short right field as Rizzo scored on Hosmer’s error.

“A couple young guys playing really fast, trying to do special things, and sometimes those plays just aren’t there,” Padres manager Andy Green said. “If you’re going to make mistakes in the field, mistakes of aggression are the better kind of mistakes.”

Craig Kimbrel struck out three around a four-pitch walk in the ninth for his fifth save in six chances. San Diego has lost five of six and 11 of 15.

Jon Lester made his 400th big league appearance and matched his career high by allowing 12 hits, giving up four runs in six innings. He needed 26 pitches to get through the first on an afternoon with a 93-degree temperature at game time.

“Yeah, it was miserable,” Lester said.

Padres left-hander Eric Lauer gave up four runs, five hits and three walks in 4 2/3 innings in his first appearance since July 5. Lauer had gone on bereavement leave following the death of his father. He remained in the game after he was hit on the back by Albert Almora Jr.’s single in the third.

“We’ve got to hit lefties, man,” Maddon said. “We got to figure that part of it out. That’s a big part of moving down the road.”

Hunter Renfroe hit a sacrifice fly in the first and Machado made it 3-0 in the third with his 24th homer, a two-run drive.

Rizzo’s fourth career slam put Chicago ahead in the bottom half.

Mejía tied the score with an RBI double in the fifth, and Báez hit an opposite-field homer to right-center in the bottom half.

Chcago figures to be in the market for a left-handed reliever before the trade deadline. The return of Carl Edwards Jr. (strained left thoracic) from the IL left seven righties among eight relievers. LHP Randy Rosario was optioned to Triple-A Iowa. “It’s always nice to have more than one,” manager Joe Maddon said.