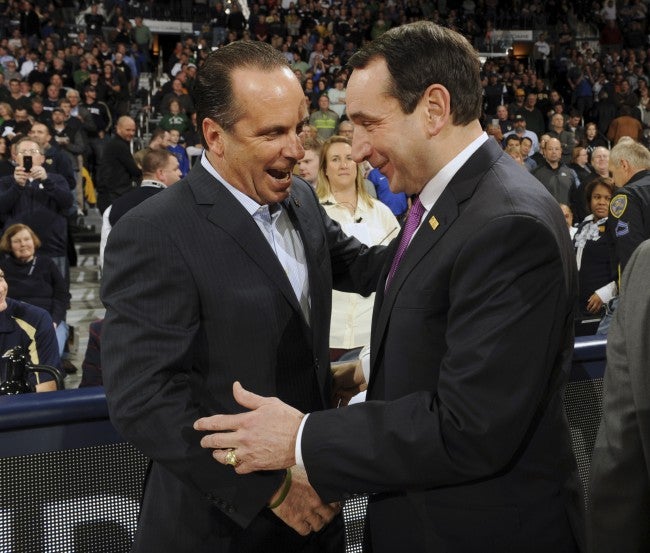 Grant sparked the winning rally when he lost control of the ball at the free-throw line as the shot clock was running down, grabbed it at the last second and hit the basket to give the Irish a 73-70 lead.

Grant added six rebounds, three steals and two blocked shots. On the pass to set up the 3-pointer, Grant looked as though he was holding for the last shot when he suddenly passed to Vasturia in the corner. It was the only basket Vasturia made all night.

A year ago the struggling Irish stunned No. 7 Duke 79-77 by holding standout freshman Jabari Parker to a season-low seven points. The Irish couldn’t do the same against Okafor, who, like Parker, is from Chicago, just 90 miles west of South Bend. Okafor was a point shy of a double-double at halftime and finished with 22 points and 17 rebounds.

“Jah had a heck of a game,” Krzyzewski said. “If he hit those free throws then we’d be talking about Jah having the amazing game, not Grant. But Jah had a great game.”

The win keeps Notre Dame (20-2, 8-1 Atlantic Coast Conference), which finished in 13th place in its first season in the league last year, in second-place halfway through the conference season. Duke (17-3, 4-3) is off to its worst start in league play since opening the 1995-96 3-4 after losing their first four league games.

The Blue Devils didn’t come up with enough big plays against the Irish, finishing with 13 offensive rebounds but had just nine second-chance points.

“We’ll look at this as some missed opportunities,” Krzyzewski said. “There were six to eight finishes right by the bucket where the ball wouldn’t go in.”

Duke: The Blue Devils failed in their attempt to win three games against top 10 opponents on the road for the first time in program history. They beat then-No. 2 Wisconsin 80-70 on Dec. 3 and then-No. 6 Louisville 63-52 on Jan. 17. … Okafor scored in double figures for the 20th straight game. …

Notre Dame: The Irish improved to 6-1 at home against top 10 teams at home since 2010, with the only loss coming against then-No. 3 Virginia earlier this month. … The Irish are 14-7 overall under coach Mike Brey against top 10 teams at home. … Notre Dame is 6-1 this season in games decided by five points or fewer. … It was Notre Dame’s 600th home victory since the Joyce Center opened since the building opened during the 1968-69 season. The Irish are 600-157 at home in that span.

Duke: at No. 2 Virginia on Saturday.

Notre Dame: at Pittsburgh on Saturday.