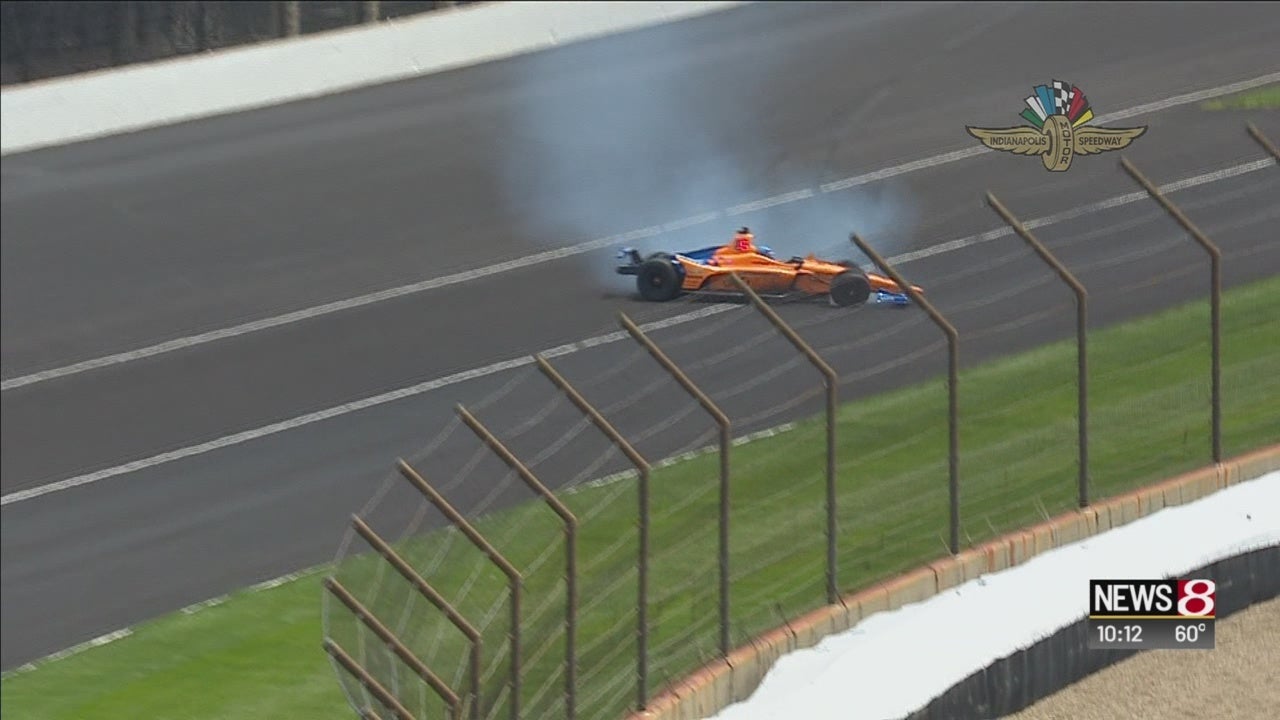 INDIANAPOLIS (AP) — McLaren’s return to the Indianapolis 500 was slowed at first by electrical problems. When Fernando Alonso finally got his car up to speed, he hit three walls at Indianapolis Motor Speedway and significantly damaged the celebrated bright orange machine.

Mechanics labored Wednesday in the buttoned-down McLaren garage trying to rebuild a car for Alonso to qualify this weekend for the Indy 500. It will need a new engine because the one in the car Alonso crashed on the second day of practice had a cracked cam cover.

This return to Indy has so far been horrific for the proud McLaren group, which on opening day had to replace the alternator and entire wiring loom on Alonso’s car.

Then came his crash Wednesday exiting the third turn. His car hit the wall, spun through the grass and hit an interior wall, then spun back across the track for a third hit. It was the first crash on an oval for the retired Formula One champion. While many a driver has been rattled by contact at the famous speedway, Alonso was ready to get back in the car as soon as it was ready.

McLaren is back at Indy as an independent entrant for the first time since the 1970s, when it won three Indy 500s in 10 appearances before returning to England with a dedicated focus on Formula One. But McLaren boss Zak Brown is an American, was a longtime Indianapolis resident and his background is in U.S.-based motorsports. Brown is expanding McLaren and has an eye on a full-time IndyCar entry as early as next season.

McLaren’s return, along with the wildly popular Alonso, has been closely followed but the first two days have been terrible. Half of Wednesday was spent assessing damage to the car McLaren built at its England factory, then debating if it should be repaired or if the team should turn to the backup built by technical partner Carlin.

Both cars were being worked on and McLaren was planning to use the Carlin-provided chassis Thursday. Qualifying for the 33 spots in the field begins Saturday; Alonso, one of 36 entrants, has been near the bottom of the speed charts.

The team remained upbeat despite the adversity.

“It’s something McLaren has to do because what it’s done, it’s given them the foundation for the future,” said Bob Fernley, head of the Indy 500 program. “In order for McLaren to take those next steps, they need the knowledge and foundation of what we’ve been doing the past few months. I think what it will show and I’m absolutely sure we will overcome the obstacles.”

Alonso’s crash was the attention-grabbing moment on the second day of prep for the May 26 race. Rookie Felix Rosenqvist also was in a hard wreck in which his car first spun into the wall and then deep into a tire barrier.

“This track can bite you pretty quick,” the Swedish driver said. Chip Ganassi Racing said it would go to a backup car for Rosenqvist.

Chevrolet found an irregularity in the engine it provided Sage Karam and proactively pulled it while Josef Newgarden had the fastest lap of the day to put a Team Penske car on top of both days at Indy.

“It means nothing,” Newgarden said of his lap at 228.856 mph. Scott Dixon was second-fastest on the day in a Honda.

Alonso, spent most of his day in street clothes. He is making his second appearance in the Indy 500 in his quest to win motorsports’ version of the Triple Crown.

Alonso ran Indy in 2017 for Andretti Autosport and stepped into a car capable of winning the race. He led laps and was a contender until his engine failed, bringing a halt to a nearly flawless month for the Spaniard at Indianapolis.

That Indy 500 was Alonso’s only race to date on an oval and his wreck Wednesday raised questions as to how crash-tested he is after a career spent racing primarily on road and street courses. Alonso in 2016 was in a spectacular F1 crash in Australia in which his car flipped twice and he wound up sidelined for a race with fractured ribs and a collapsed lung.

He said the Indy wreck was not at all similar.

“I think obviously there is a moment of stress, and this moment of danger that you feel you are in a single-seater and you are very fast and you will hit something at very high speed and it is going to hurt a little bit,” Alonso said. “All the accidents feel more or less the same way, here the difference is the speed you hit the wall is very high. It’s not only one hit, normally. The second is coming or even the third eventually will come, so you need to get ready for all of them.

Mistake from my side underestimating the grip in T3 today. I’m sorry for the team and the guys that have to work a lot now. ? Lesson learned. ? . We will be back stronger later today or tomorrow. #indy500 https://t.co/LajbGhBM0j— Fernando Alonso (@alo_oficial) May 15, 2019