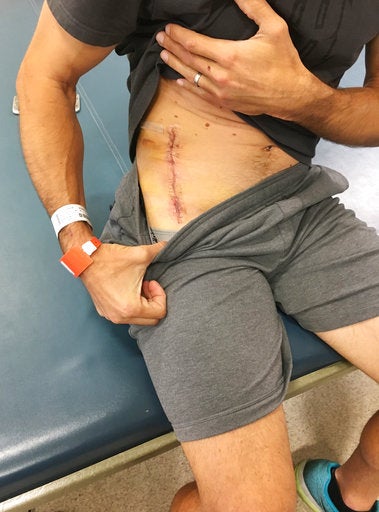 INDIANAPOLIS (AP) – Sebastien Bourdais was in one of the best race cars he’d ever had, so fast that most of his competitors thought he would win the pole for the Indianapolis 500.

On Saturday, Bourdais vowed to be back in a car this season.

Bourdais allowed The Associated Press to attend one of his physical therapy sessions at the Rehabilitation Hospital of Indiana, where he checked himself in after two surgeries earlier this week.

The 38-year-old Frenchman is already spending 3 1/2 hours a day in therapy, performing weighted leg lifts and adduction pressure drills with a rubber ball, building his strength. He used a wheelchair to get from his room to the facility gym only because the trip takes too long on crutches.

Like a typical race car driver, Bourdais complained his chair is too slow and pulls to the right – “I need a better setup,” he quipped – and he is determined not to use it Sunday, when he returns to the scene of his crash to attend the Indianapolis 500.

“I am not showing up at the race track in a wheelchair,” he said.

Watching as a spectator and seeing James Davison in his car will be difficult. Bourdais was having a banner year. He was part of the winning sports car team at the Rolex 24 at Daytona, he captured the IndyCar opener at St. Petersburg and was driving a car he felt was capable of winning the 500. Next month, he was planning to return to his hometown in France to defend his class title at the 24 Hours of Le Mans.

A four-time series champion who ranks sixth on IndyCar’s career win list – second among active drivers behind Scott Dixon – Bourdais had never before been seriously injured in a race car.

Three small wiggles on a flyer lap at Indianapolis last Saturday changed that.

“I’ll tell you, it makes you feel very small, your clothes cut off and lying naked on a board,” Bourdais said. “But I can only blame myself. Those things happen.”

Bourdais moved to tiny Dale Coyne Racing this year, convinced he could help the team become a contender. He got Coyne to hire his old engineers, Craig Hampson and Olivier Boisson, who had been so instrumental in his success. Hampson was part of 31 race victories and four consecutive Champ Car World Series championships, while Boisson won four races with Bourdais over the last three years.

The reunion has been wonderful for Bourdais, and he felt badly that Hampson blamed himself and the setup on the car for his accident. Bourdais instead shoulders the blame, and said many of his injuries would have been prevented if the tub of his car had not collapsed.

“I’ve never had a car like that. I could do anything I wanted,” he said. “I remember everything from the little wiggle in Turn 1, to the bigger wiggle in Turn 2, to the terminal wiggle, to hitting the wall with the pedal to the metal.”

He was briefly unconscious and, when he came to, told the safety crew his pelvis was broken. It was a matter of hours before he was undergoing surgery at Methodist Hospital.

Bourdais was discharged Wednesday but was not comfortable returning to his hotel room, where his wife would be responsible for him so soon after surgery. So he checked into the rehab facility a short drive from the speedway and began the long, painful process of getting back in the race car.

He plans to be there until next week, when the staples are removed from the foot-long incision down his right side. He’ll fly home to St. Petersburg, Florida, and continue his therapy there.

For now, he’s surrounded by the well-wishes of so many closest to him. The second bed in what he calls his “VIP suite” overlooking the interstate is covered in baked goods, gifts and a stack of cute, colorful cards made by daughter Emma’s fourth-grade class. Tacked to the nurse’s board next to his bed is a photo of his two children hugging him after a victory, and a bouquet of red and white flowers with checkered flags in the vase stands on a table nearby.

Bourdais keenly understands the dangers of racing after the deaths of IndyCar drivers Dan Wheldon at Las Vegas in 2011 and Justin Wilson at Pocono two years ago. Accidents far less severe than his own have proven fatal at Indy. But he also is practical about his profession, and Bourdais said his wife Claire would never discourage him from getting back behind the wheel.

“She would never ask me,” he said. “This is not my entire life, but it is my passion and what I love to do. And that would be a very big ask that she would never make.”