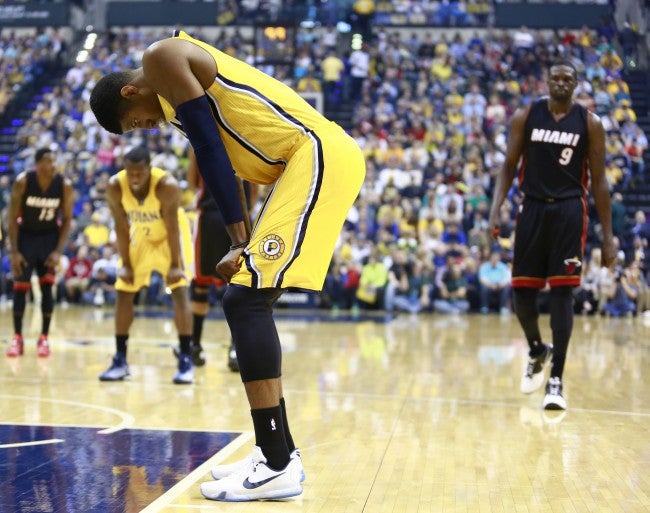 INDIANAPOLIS (AP) – Paul George’s season debut provided a needed boost Sunday as the Pacers put themselves back in the playoff contention with a 112-89 rout over Miami.

George finished with 13 points in 15 minutes — his first action since breaking his right leg Aug. 1.

Luis Scola scored a season-high 23 points to lead Indiana (34-43) to its second straight win. The Pacers moved into a tie with Miami (34-43) for the No. 9 spot in the East. Both teams trail Boston by one game for the conference’s eighth and final playoff spot.

Miami was led by Dwyane Wade with 27 points but lost its fourth in a row.

The Heat took a 58-57 lead midway through the third, but the Pacers finished the quarter on a 20-8 run to make it 77-66. Back-to-back 3-pointers from George early in the fourth sealed it.

George finished 5 of 12 from the field with three 3-pointers, two rebounds and two assists. And even though he missed a breakaway layup in the first half — a play he normally would have dunked — nobody was complaining inside Bankers Life Fieldhouse.

When the gruesome injury occurred during a Team USA scrimmage in Las Vegas, most thought his season was over.

So when George replaced Solomon Hill with 5:34 left in the first quarter, the fans gave him a standing ovation as they waved yellow “Welcome Back PG” signs. The reaction continued all night.

Fans booed when George was called for his first foul. They roared every time he touched the ball. They gave him a rousing ovation when he made his first shot, a 12-foot fadeaway to his right, grimaced when he missed that layup and erupted again when he made the two 3s.

But the Pacers needed the win more than they actually needed George.

They scored the first nine points, gave up the next eight and then pushed the lead back to 32-23 early in the second quarter. Indiana still led 51-47 at the half.

Miami took advantage of Indiana’s sluggish second-half start to pull ahead on Goran Dragic’s 3-pointer, Miami’s first of the game, with 5:58 left in the third.

Indiana answered with a 15-4 spurt, extended the lead to 11 after three and started pulling away again after George made the 3s in the fourth.

Heat: Miami played small because centers Chris Andersen (bruised left foot) and Hassan Whiteside (cut right hand) both sat out. But the Heat went just 2 of 20 on 3-pointers. The Heat have lost two of their last four games by more than 20 points.

Pacers: Indiana, meanwhile, thrived on 3s. C.J. Miles had five, two short of a season. The Pacers were 14 of 30 overall from beyond the arc and improved to 21-18 at home.