Severe storms return to the Southeast 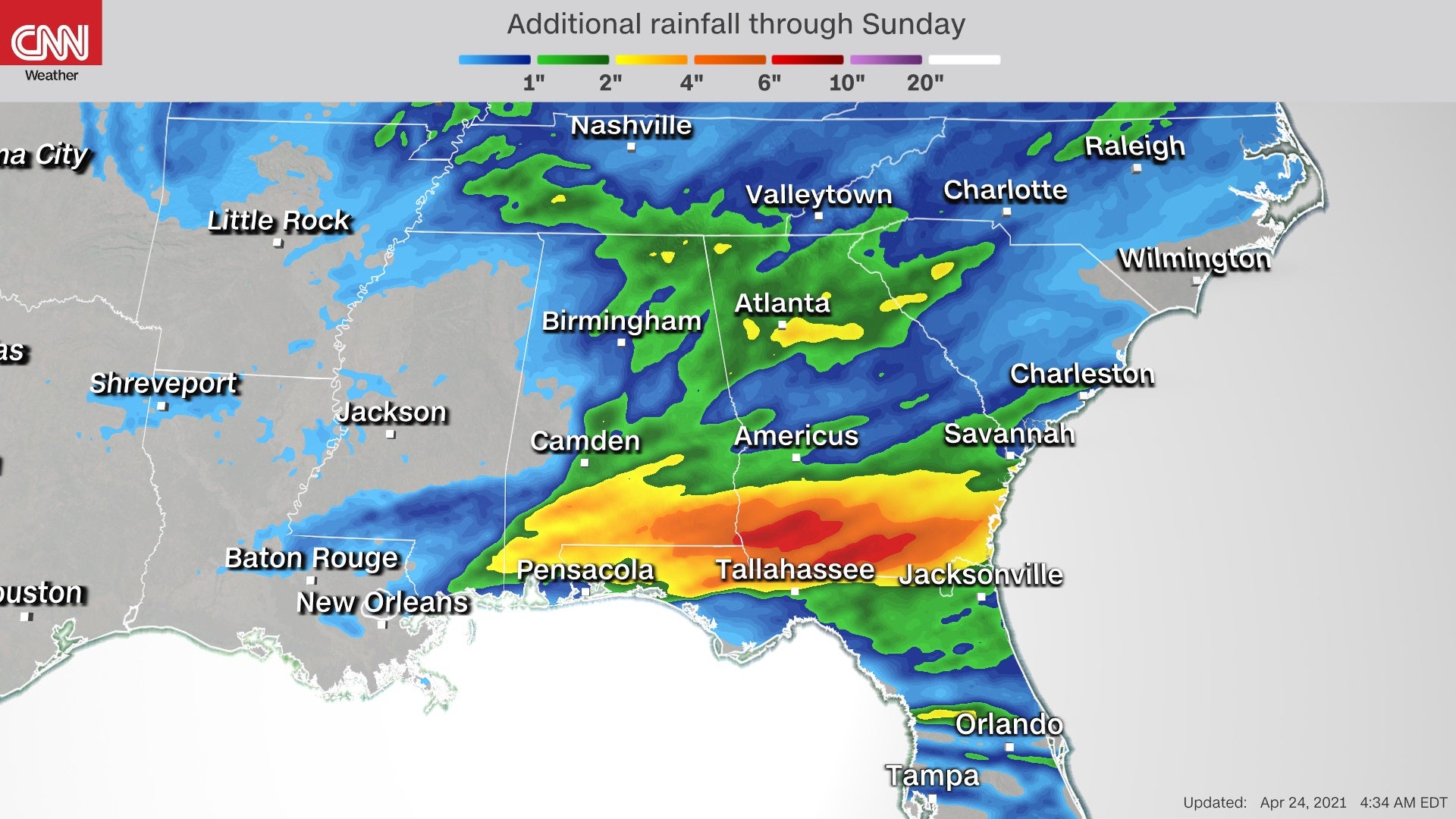 (CNN) — The threat of severe storms is forecast for the Southeast on Saturday, bringing the potential for large hail, damaging winds and even a few tornadoes.

Severe storms struck the central and southern United States on Friday, spawning at least one confirmed tornado in Texas and several reports of baseball-sized hail or larger.

This same storm system will track east, bringing similar hazards to over 20 million people across the Southeast on Saturday afternoon.

An enhanced risk of severe weather, Level 3 out of 5, has been issued by the National Weather Service’s Storm Prediction Center. The area under enhanced risk stretches across portions of Alabama, Georgia and Florida. It includes the cities of Savannah, Georgia, and Tallahassee, Florida.

A ‘slight’ risk, Level 2 out of 5, has been issued for Montgomery, Alabama; Jacksonville, Florida; and Columbus, Georgia.

“Widely scattered to scattered severe thunderstorms are expected on Saturday across parts of the Southeast. All severe hazards appear possible including large to very large hail, damaging wind, and tornadoes,” according to the storm center.

The first round of severe storms tracked across the Gulf Coast on Saturday morning, bringing with it damaging winds, golf ball-sized hail and some potential tornadoes.

A second round of storms is forecast to develop Saturday afternoon and evening, bringing more rain and severe hazards to some of the same areas affected earlier this morning.

This round of storms will affect areas of Alabama, Georgia and Florida through the evening before pushing offshore early Sunday morning.

Since this severe threat continues throughout the overnight hours, it is important for residents in these areas to have weather alerts set up on their cellphones to awaken them in case any bad weather immediately threatens your town.

Along with the severe weather, there is the risk for flash flooding especially across portions of Alabama, Georgia, Florida, and South Carolina.

A ‘slight’ risk, level two out of four, of excessive rain has been issued by the weather service’s Weather Prediction Center for this region.

There is an “elevated flood threat for creeks and smaller streams, especially where storms may track over the same areas,” the weather service office in Atlanta said.

These storms are forecast to produce a widespread rainfall of between 2 and 4 inches across the Southeast on Saturday. Even higher rainfall amounts of 4-6 inches are forecast across southern Alabama, southern Georgia, and northern Florida today.

Severe weather in the US should settle down Sunday and Monday, but the Storm Prediction Center suggests a return on Tuesday for parts of the southern Plains: “Confidence remains high that severe thunderstorms will impact the central and southern Plains on Tuesday. (Forecast variables) continue to suggest the potential for supercells capable of all severe hazards.”