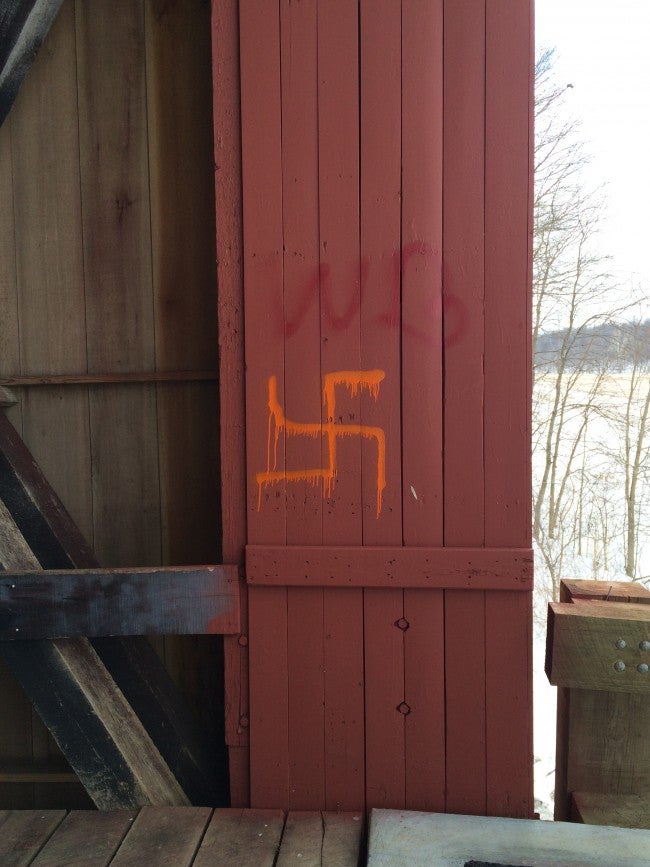 PUTNAM COUNTY, Ind. (WISH) — A historic Putnam County covered bridge that was just refurbished last year at a cost of $1.7 million and dedicated last October has been vandalized – not once, but twice in as many days.

Karla Lawless Executive Director of the Putnam County Convention & Visitor Bureau quickly headed out to check on the damage to the Houck Bridge after it was discovered Wednesday. She was back out at the bridge Thursday, dismayed, to find even more graffiti.

“As it does with every bridge, it is disheartening,” she said. “You become angry a little bit. Because we try to preserve these because they are part of our heritage. We have nine here and we’d like to keep them as clean as we possibly can.”

The graffiti isn’t obvious until you get closer to the bridge. It starts at the west entrance on the concrete and is scattered throughout the bridge – on the floor, the walls even beams high over head.

“They can’t drive a truck in here and put a ladder in the back of that,” Lawless said. “I don’t think they can climb the beams and still hang on and do what they’ve done so it had to have taken them some time.”

The bridge, which was built in 1880 and refurbished in 2014, was slated to be the site of several events including weddings.

“We also planned to utilize this bridge for catered lunches and dinners and it’s just not something you want to dine and see,” said Dianna Love Assistant Director of the Convention & Visitor Bureau. “We have motor coach groups that come in and like to see the covered bridges and motorcycle groups.”

The interior wasn’t the only place vandals hit. The abutments holding the massive bridge up were also covered with graffiti.

Typically, Lawless said, neighbors keep an eye on the bridges and report any problems to the Convention & Visitor Bureau. Now she hopes they will be even more vigilant and call the sheriff’s office if they see any suspicious activity. Lawless also plans to drive by the bridge as well.

She plans to research just what it will take to clean up the graffiti. She hopes it won’t cost much or take long so the bridge will be back to its refurbished glory in time for wedding season.