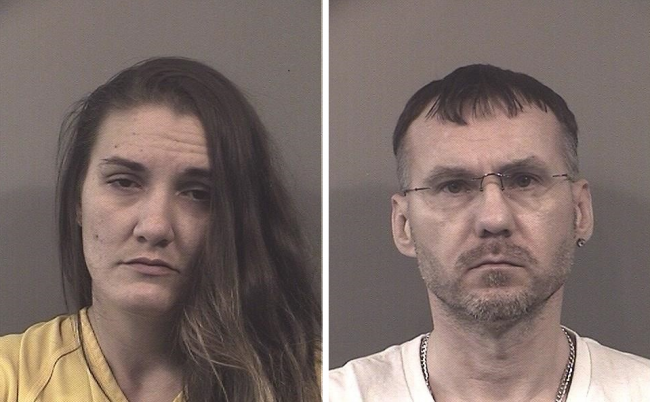 FRANKLIN, Ind. (WISH) — Two people have been arrested in connection with possession of drugs and drug paraphernalia following a traffic stop in Franklin.

According the Johnson County Sheriff’s Office, just after 12:30 a.m. on Tuesday morning a deputy pulled over a red Pontiac Grand Am in the 5300 block of South US 31 for a routine traffic stop after the car did not appropriately signal a turn. The driver, Hedger, said his turn signal was not working. While Hedger and his passenger, identified as Mitchell, were looking for their vehicle registration, Deputy Heisinger called for an additional deputy and K-9 partner to join him at the scene. The K-9, Katja, positively indicated the presence of narcotics.

A search of the car uncovered a black-and-white polka-dotted women’s wallet under the passenger side floorboard containing the following: two pills identified as oxycodone; two hypodermic needles; used cotton swabs; a spoon with a burnt bottom; and two foil packs with a brown substance with a presumptive positive test for heroin. In addition, the center console of the car contained a multicolored glass pipe.

According to a report from Deputy Heisinger, Mitchell said the wallet did not belong to her but that she does use heroin and had used it the previous night with Hedger. Hedger stated the pipe did not belong to him, and that he was neither a heroin nor an illegal narcotic user. He also said he had not used methamphetamine in a year.

Hedger and Mitchell were taken to the Johnson County Jail.