2 arrested in connection with death after overnight SWAT standoff 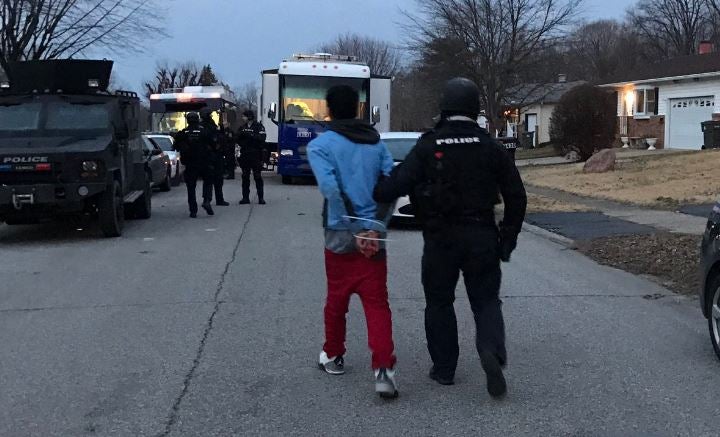 INDIANAPOLIS (WISH) — Two juveniles were taken into custody after an overnight SWAT standoff linked to a killing on the south side of the city.

Indianapolis SWAT negotiated with suspects in the 3400 block of Redwood Drive, near Thompson Road and McFarland Road.

An Indianapolis Metropolitan Police Department official said four adults and two children left the Redwood Drive home when police arrived around 5 a.m. Two juveniles who refused to come out were taken into custody around 7:30 a.m.

SWAT was forced to use flash grenades and tear gas before the suspects came out.

IMPD says the SWAT standoff stemmed from a death investigation that began Thursday night in the 1900 block of Union Street. A trail of blood led police to a Jacob Arnett, 20, a man who was later pronounced dead at the scene.

Police say a dispute over drugs led to the killing.

The two suspects have not been identified. No one was hurt in the standoff. On Friday afternoon, Arnett’s friends returned to the scene.

“He was a real good guy, no negativity around him at all, he wanted the best from everyone, and he was a real nice outgoing guy,” said Brandon Engle, Arnett’s friend.

The two teens are currently being held in the Marion County Jail, the prosecutor’s office has not determined if the two teens will be waived to adult court. Currently a court date has not been set.

Stay with WISHTV.com for updates.