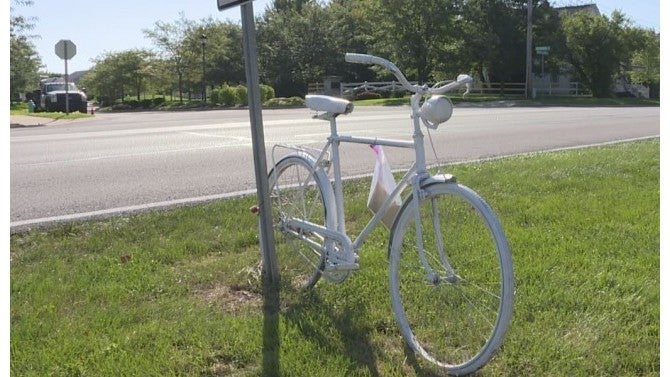 FISHERS, Ind. (WISH) — A second grade class at Brooks School Elementary is calling on the city of Fishers to help teach its residents about the ghost bike memorial at Brooks School Road and 126th Street.

The ghost bike memorial is an old bicycle painted completely white and placed near an intersection where a cyclist was killed or severely injured while riding. Ghost bike memorials are all across the world, and cyclists in Fishers estimate there are about a dozen in Central Indiana.

David Baldock teaches second grade at Brooks School Elementary School and was working on a series of lessons about symbols. He had taught the class about flags, roadsigns and other symbols, but admitted he didn’t know the meaning behind the white bicycle he passed every day on his way into the building. He said it wasn’t until a WISH-TV story explained its meaning, that the bike’s purpose became clear.

“It was a symbol that was in front of our school,” Baldock said, “so it naturally lended itself to our inquiry about symbols.”

When he brought up the white bicycle in class, his second graders had a variety of answers for why they thought it was placed on the roadside.

“I thought it was for sale,” said 8-year-old Luke McGrath.

“I just thought it was decoration. I didn’t even know until we all found out,” said 7-year-old Elizabeth Mac.”We were very surprised that somebody died there.”

As the students learned the signs meaning, Luke McGrath said they felt like they needed to share it with more people.

“The bike tells you that someone died there and to drive carefully but no one knows what that means, so we should do something about it ,” said McGrath.

With Baldock’s help, the students wrote a letter to Fishers Mayor Scott Fadness, asking for the city to put a special sign in front of the memorial.

Baldock said he sent off the letter, feeling proud of his students for taking action on something they cared about. He was surprised to get a response from Mayor Fadness himself, asking if he could visit the class and discuss community symbols.

“I couldn’t believe it. I was ecstatic. I was on the phone with him in a matter of minutes,” said Baldock. “The next day when I told the kids they were jumping through the roof.”

“I felt really good and I was really surprised,” said McGrath.

“From this whole experience I’m glad they’ve embraced the action component of the inquiry. Any time in an educational process or any process we’re hoping they’re action-oriented or action-minded enough to make things happen,” said Baldock.