3 hurt in dramatic crash leaving truck on its side 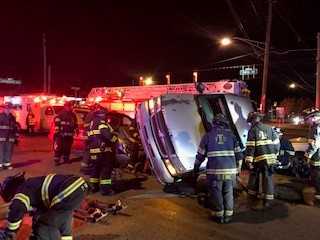 INDIANAPOLIS (WISH) — A dramatic crash Thursday night at an intersection on the east side left a truck on its side and sent three people to hospitals, Indianapolis Fire Department said.

Emergency crews were sent to East 38th Street and Shadeland Avenue about 8:20 p.m. to the three-vehicle crash.

Jose Barron, 21, and his 11-month-old daughter had to be extricated from a Chevrolet Silverado truck that ended up on its driver’s side and sandwiched between two other vehicles.They were removed from the truck through the driver’s-side window.

Barron and the toddler were taken to Riley Hospital for Children at IU Health in good condition.

A Dodge Caravan driven by Alberetta Davis, 55, also was in the crash. David was taken to Community Hospital North in good condition.

Indianapolis Metropolitan Police Department was investigating the crash, the fire department said in a news release.