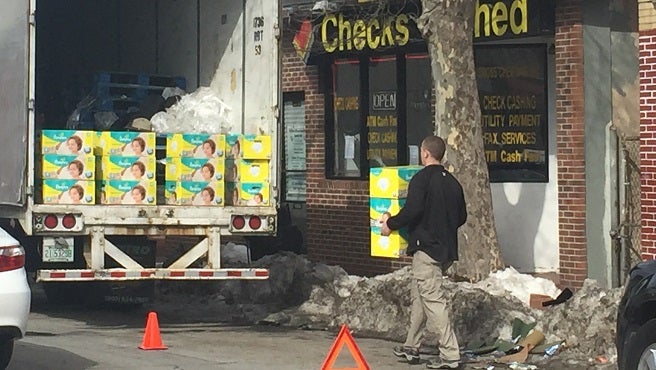 PROVIDENCE, R.I. (WPRI) – A raid at a former Providence business Thursday morning turned out to be connected to the theft of $90,000 worth of diapers.

Investigators brought out numerous boxes from a storefront on Smith Street and loaded them onto a truck.

According to Rhode Island State Police, the diapers were destined for the Amazon distribution center in Fall River.

Detectives recovered about 800 boxes of diapers on Thursday, according to Rhode Island State Police, while an additional 1,200 boxes have yet to be found.

Bettis, 59, of Providence, and Martin, 41, of Coventry, were charged with larceny over $1,500 and conspiracy. Martin was also charged with receiving stolen goods.

Police said a warrant has been issued for a third suspect.

According to police, Bettis was hired by the owner of the delivery truck to drive the load of diapers from Pennsylvania to Fall River last Thursday. He instead allegedly sold them once he got to Rhode Island and told the truck’s owner he was not making the delivery and that the truck could be picked up in West Greenwich.

The owner contacted state police after locating the empty truck in a motel parking lot.

Upon learning that some of the diapers were being stored at a vacant storefront on Smith Street, detectives obtained a search warrant and conducted the raid at about 11:15 a.m. Thursday.

David Imm, who has worked in loss prevention in New England for almost 20 years, said that the diapers were intended for the black market.

Imm said that the stolen diapers are then sold in stores for pure profit.

“The store owner is going to get a huge discount on having to buy these and they are going to sell them for the regular price or a little bit cheaper knowing that it’s a wanted commodity,” he said.

Police said each box contained about 100 diapers and sold for about $40.

There was a sign on the building for “Repair Zone RI” advertising phone repairs. When Eyewitness News called the phone number on the sign, it was disconnected.

The windows of the store were covered in newspapers.