A look at Indiana’s vice presidents 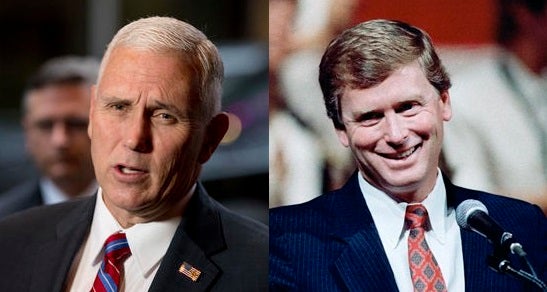 INDIANAPOLIS (WISH) — Though mid-pack by population, Indiana nearly leads the nation in vice presidents. Mike Pence will be the sixth from our state; only New York claims more.

Ray Boomhower, senior editor from the Indiana Historical Society, says Indiana’s prominent role developed because it was, for many years, an important swing state.

“And usually it came down to either New York or Indiana, so you saw the parties put people from those two states on their tickets,” Boomhower said.

The Indiana Historical Society and History Center have volumes of information about Hoosiers who went on to be vice president.

The list starts with Schuyler Colfax. He won the office on a ticket with Ulysses S. Grant. History credits Colfax for taking a strong stand against slavery.  He was also one of the earliest stars of the GOP. But his time as vice president ended in disgrace.

Boomhower says Schuyler “was implicated in a bribery scandal, known today as the Credit Mobilier scandal.”

After one term in Washington, Colfax was out of office, off the ticket and never ran for office again.

Thomas Hendricks was vice president to Grover Cleveland, albeit briefly. He died only eight months into office. Thomas, who had been governor of Indiana, kept working for fellow Hoosiers at the White House. The Historical Society has a fascinating example. It’s a letter from a woman from Indiana seeking a job. On the reverse, Hendricks penned a lengthy recommendation, calling for her to be hired.

Susan Sutton from the Historical Society puts the note in a modern perspective, saying “this is the 19th century equivalent of forwarding an e-mail.”

The third of Indiana’s vice presidents, Charles Fairbanks, went to the White House with Theodore Roosevelt – but when Roosevelt went to Fairbanks’ house, something went very wrong. Fairbanks was known as a teetotaler who courted the temperance vote. But in the preparations for an Indianapolis visit from Roosevelt, someone saw fit to order cocktails for the party. Critics seized on the inconsistency, cried hypocrisy and forever after called “‘Buttermilk Charlie Fairbanks” “Cocktail Charlie” instead. His political career never really recovered.

Former Governor Thomas Marshall landed on the Woodrow Wilson ticket. Historians say Marshall was modest and witty – and he’s still remembered for the quip “What this country needs is a good 5 cent cigar”. But he also faced true crisis: President Wilson suffered a debilitating stroke in 1919.

“Marshall was kind of in limbo,” Boomhower says. “He did not know what to do.” Boomhower says Marshall declined to push for power. Scholars still debate whether that was the best decision.

Dan Quayle is fifth on the list of Hoosier V.P.s. He ran and won with George Herbert Walker Bush. Reviews of his time in the job tend to focus on his stumbles. Boomhower feels the longer view of history might, eventually, be kinder.

“You have to let things settle down and take a look back and we’ll get a truer picture of what he was like in office. And that’s what’s great about history. Reputations change as time goes on and they are re-evaluated again and again,” said Boomhower.