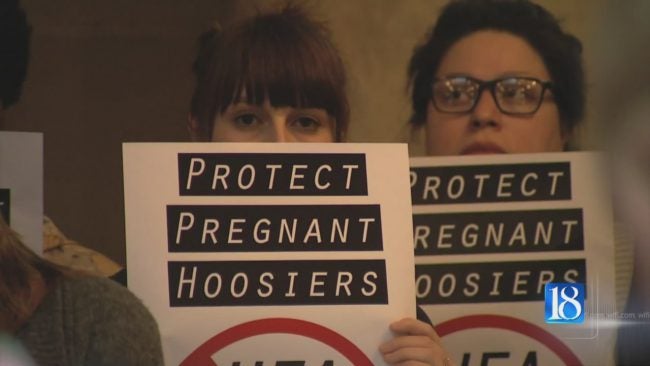 LAFAYETTE, Ind. (WLFI) The legal fight is on in the state of Indiana over Gov. Mike Pences new abortion law.

The law doesnt take effect until July 1, but the ACLU and Planned Parenthood of Kentucky and Indiana are doing what they can to ensure the law never makes it to that date.

“The most alarming and upsetting aspects of 1337 is that intrusion into the relationship between a woman and her doctor,” ACLU Executive Director Jane Henegar said. “Imposing, inserting politicians into that conversation erodes that trust.”

The new law prohibits doctors from knowingly terminating a pregnancy because of the babys sex, race, ancestry or genetic disabilities such as Down syndrome.

“This is comprehensive pro-life legislation that expands the information that expectant mothers received,” said Pence. “And also provides additional protections for the unborn.”

Henegar said the law is unconstitutional and violates the First Amendment.

“Because repeatedly the U.S. Supreme Court has said that a woman may get an abortion within the first trimester for whatever reasons she deems best, based on her circumstances,” said Henegar. “That conversation isnt going on now.”

ACLU is going up against the state and suing on behalf of Planned Parenthood.

Henegar said the law is intended to make it difficult, if not impossible, for women to have abortions.

“It doesn’t make their lives any better,” said Henegar. “It’s just a way of ultimately prohibiting a womens access to a safe legal abortion.”

Jane Henegar said the ACLU is waiting to hear back on a date for a preliminary injunction.

She said the judge knows this law is to take effect July 1, so there is a very clear timeline for a decision.

The law will not go into full effect until the court can have a full hearing.