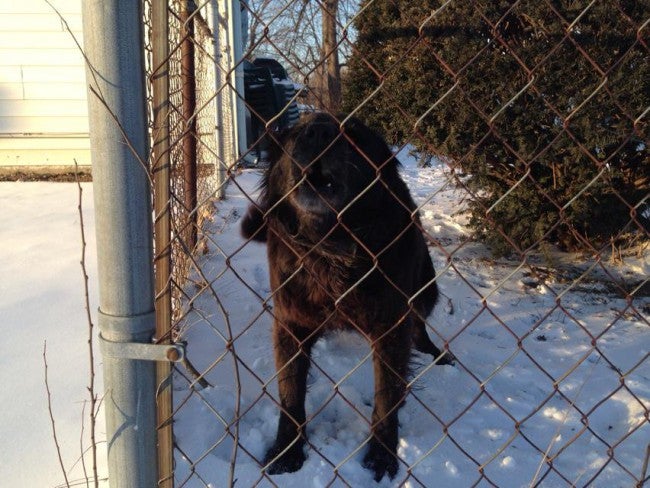 Since Feb. 14, Indianapolis Animal Care and Control (IACC) has investigated 141 cases specifically of pets left in the cold.

Seventeen times the case was so severe, the animal was confiscated from the owner.

Although that’s part of their job, preventing it from reaching that point is their main priority.

In the backyard of a home on the city’s southeast side, Animal Control Officer Jerry Kellems is trying to help the helpless.

“We just don’t want to see anything happen to the dog and I know you don’t either,” he said to the pet owner.

The dog normally stays outside, but with wind chills hitting below zero, he asked the owner to bring the animal inside for the night.

He said the dog had adequate shelter. It had a dog house with straw inside as well as a water bowl. But officials at IACC said they’d prefer an animal be taken inside when temperatures fall below zero.

“Most people when confronted with that will, ‘Oh I didn’t know’ and they’ll bring them inside,” said Dawn Contos, Community Outreach at IACC.

But that’s not always the case. More than a dozen pets are now staying at the IACC center because their owners neglected them by leaving them outside. Contos said most times, owners are just unaware they’re harming the animal.

“It frustrates me because there’s so much information available and it’s not that hard to find out if you really want to take the time and do it,” she said.

That’s why they feel educating owners about the dangers of leaving a pet outside is just as important and confiscating them when necessary.

24-Hour News 8 came across one dog that had been outside for several hours. The owner wasn’t cited, just informed on how to keep her pet safe.

Officer Kellems told the owner the dog should be outside no more than 20 minutes.

It’s the type of ending he hopes for but knows doesn’t always happen.

“There’s situations where animals are left tethered outside or chained outside to the point where they’ll be frozen to the ground,” he said. “This is why I do this job because I want to help make a difference for the animals and the community itself.”

If an animal is confiscated, the owner will get an ordinance violation and likely get their pet returned.

But repeat offenders will have to go before judge who will then determine whether or not the owner deserves to have the pet back.ADEQUATE OUTDOOR SHELTER

When temperatures aren’t hovering around zero, IACC officials said it’s OK to keep a dog outside in the winter as long as it has adequate shelter. That means three walls, a roof, and a floor like a dog house.

They also need to be insulated with straw or a heat lamp. The pet must also have water and food, neither of which should be frozen.

But frigid weather isn’t the only danger pets might encounter while outside in the winter.

“The ice melt can be hazardous to them, antifreeze is also hazardous to pets. It tastes sweet to them so they want to drink it,” said Contos. “Pets can get hypothermia, they can get frostbite and sometimes you wait too long to see veterinary attention.”

That’s why she said if your pet is acting strangely after being outside, don’t hesitate to bring it to a vet.

For more tips on how to keep your pets safe in the winter, click here.

If you’re in need of a dog house or straw, click here.