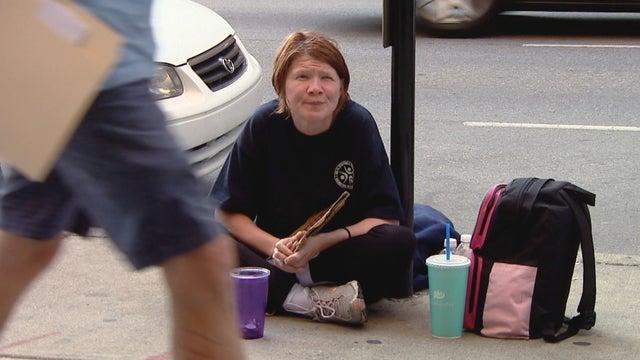 INDIANAPOLIS (AP) — The City-County councilor proposing new rules about sitting and lying in downtown streets addressed that with people in his district at a meeting Thursday.

Mike McQuillen said he has heard complaints from his constituents about the homeless and wanted to do something about it.

“Over the last five, six months I’d had a real increase in people reaching out to me saying, ‘Hey, we don’t feel safe when we’re downtown’ or “People are harassing me, aggressively panhandling,’ whatever else,” McQuillen said.

McQuillen’s proposed oridnance would ban people from sitting or lying in public sidewalks, streets or alleys in the Mile Square area from 6 a.m. to midnight.

“If they’re homeless and they need assistance, we have shelters like the Wheeler Mission and Horizon House, places where they can get help,” McQuillen said. “If they’re panhandlers, they need to go somewhere else. So, I want to put the spotlight on everybody downtown and not ignore them.”

The ordinance would not be enforced unless there’s somewhere for the people to go.

“We’ve had a lot of interest from churches and other faith-based organizations who have facilities open,” McQuillen said. “We’re in the process of trying to find even more places.”

Ken Falk, legal director of the American Civil Liberties Union of Indiana, said he does not think this ordinance would help with the issue of homelessness.

Further, he said he thinks it could be unconstitutional.

Falk said the ACLU of Indiana can’t say whether they will file a lawsuit if the ordinance passes, but they are watching this issue and want to take a look at the ordinance in its final form.

The City-County Council will have committee hearings over the next month or two on the proposal.