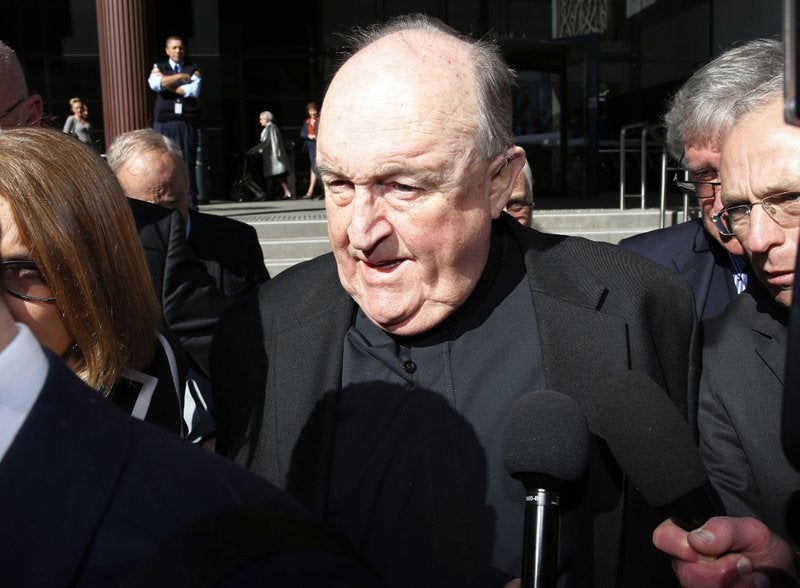 NEWCASTLE, Australia (AP) — The most senior Roman Catholic cleric convicted of covering up child sex abuse was ordered by an Australian court Tuesday to serve his 1-year sentence in home detention rather than jail.

Newcastle Magistrate Robert Stone on Tuesday ordered former Adelaide Archbishop Philip Wilson to be detained at his sister’s house for at least six months before he is eligible for parole. He will be under strict supervision including having to wear a tracking device that would alert authorities if he left the house.

Wilson, 67, has denied the accusations and had refused to resign pending an appeal. But Pope Francis accepted Wilson’s resignation last month after mounting pressure including from the Australian prime minister for him to be fired.

Stone in May found Wilson guilty of failing to report to police the repeated abuse of two altar boys by pedophile priest James Fletcher in the Hunter Valley region north of Sydney during the 1970s. Wilson was an assistant priest at the time. Fletcher died of a stroke in 2006 while serving a prison sentence for child sex abuse.

Wilson, dressed in the black suit of a cleric, showed no emotion when the decision was announced.

His lawyer Ian Temby told the court Wilson planned to appeal his conviction but would not be applying for bail.

Outside court, Wilson was confronted by one of Fletcher’s victims, Peter Gogarty, who repeatedly asked Wilson if he would apologize as he was led to a waiting car, but the clergyman did not respond.

“I’m beside myself about this,” Gogarty later told reporters. “I’m still here, still hurting … and not a single, solitary word to say sorry.”

He called Wilson’s detention lenient, labelling it a vacation.

Stone found Wilson had shown no remorse or contrition for the cover-up and his primary motive had been to protect the Catholic Church.

The magistrate accepted Wilson was unlikely to re-offend but found he had to serve a period of detention to deter others.

He said home detention was adequate punishment given Wilson’s age and mental and physical conditions and that he had previously been of good character.

Bishop Greg O’Kelly, who is running the Archdiocese of Adelaide until a new archbishop is appointed, said in a statement he was keeping Wilson “in his prayers as he formally commences this stage in his life, while also remembering the victims and survivors of abuse in the church.”