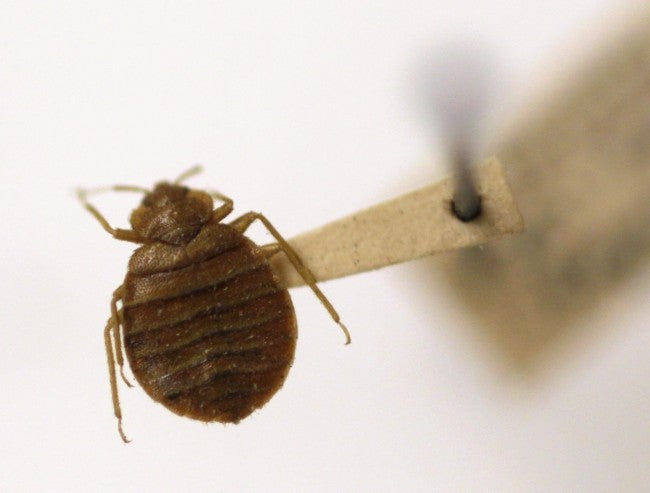 (CNN) — A Walmart in Pennsylvania is facing a bedbug infestation after someone released the parasitic insects in a men’s changing room, state police said.

A manager at the store in Edinboro found a closed pill bottle with live bugs crawling inside and reported it to authorities Thursday, police said in a release. The bottle was found inside a boy’s jacket that was for sale.

“We take this seriously and are looking into this,” a Walmart spokesperson told CNN. “We are fully cooperating with law enforcement on their investigation.”

On Friday, health safety company Ecolab confirmed that the insects were bedbugs. An Ecolab employee also reported seeing bedbugs crawling around the men’s changing rooms the same day, according to police.

A Walmart employee later found a second closed pill bottle containing dead bedbugs in the men’s department, police said. Edinboro is in the northwest corner of the state, near Erie.

“A third-party pest management service has visited the store and we are working with them to assess next steps,” the Walmart spokesperson said. “In the meantime, we have blocked off the impacted area.”

State police are investigating the matter and looking for the person or people responsible, they said.

Bedbugs are “small, flat, parasitic insects” that survive by feeding off the blood of people and animals as they sleep, according to the Centers for Disease Control and Prevention.

They do not spread disease but can leave itchy bite marks that can lead to an allergic reaction for some people. While extremely small, bedbugs can live for months without feeding.

Bedbug infestations are also very expensive to fight. Professional extermination of bedbugs typically costs $200 to $1,500 per room and often fails.