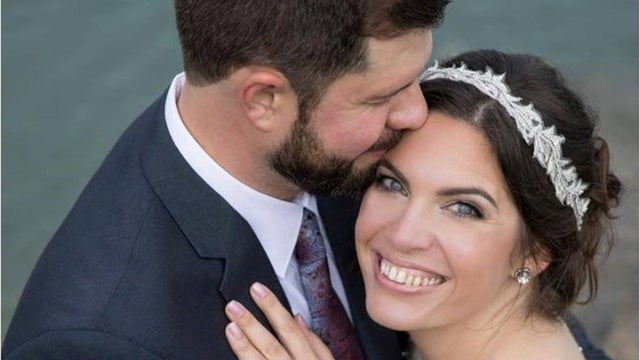 KNOXVILLE, Tenn. (WATE) – A violent seizure in 2013 would change the course of Brooke Wheeler’s life. Rushed to the hospital, doctors would discover a tumor inside Wheeler’s brain.

Once Wheeler was in surgery, doctors found completely removing the golf ball-sized tumor would permanently paralyze her. Instead, they performed a biopsy which would only be the beginning of her journey.

“They did the biopsy which did paralyze her. She had to re-learn how to walk, but it wasn’t permanent paralysis,” says Wheeler’s husband, Seth Downing.

Wheeler was forced to once again learn what most of us only have to do once in our lives – walk.

“My brain had to reconnect all the wires to the left side because it’s right on my motor cortex,” said Wheeler.

“And we weren’t married yet, that’s actually what reconnected us. We’re high school sweethearts,” said both Wheeler and Downing.

On and off again as high school relationships often go, the two made their split final in their early twenties.

While being filled with radiation and learning to walk again, Wheeler’s inoperable brain tumor did the unimaginable: it brought her a husband.

“A friend of mine reached out to me and told me that Brooke had brain cancer and so, when I found out I was completely shocked,” said Downing.

It’s not hard to guess where their story went next. The Downings have been married for one month now.

Their ceremony was officiated by her best from high school whose front yard is where they shared their first kiss nearly 20 years ago as kids.

“You have an opportunity to respond to what happens, and you can see the blessings and the gift through it and choose to celebrate life,” says Wheeler. “And one of my things I say all the time now is you live life fearlessly, not recklessly.”

As fearless as the support system reaching across state lines, everywhere Wheeler’s radiation and physical therapy took her, was an army of support.

Through word of mouth, Wheeler was referred to a unique stem cell treatment called Infusio, which would take her overseas to Germany for the four-week treatment program.

“So it’s dendritic stem cell therapy and they have more of a holistic approach,” said Wheeler. “The kind of premise behind it is that it’s building up your immune system and then allowing your own immune system to attack the cancer.”

Just the thought of getting the treatment and how it would change Wheeler’s life brings tears to her eyes.

“You know when you have something like this you want to do everything you can to make sure you’re living your fullest life,” said Wheeler.