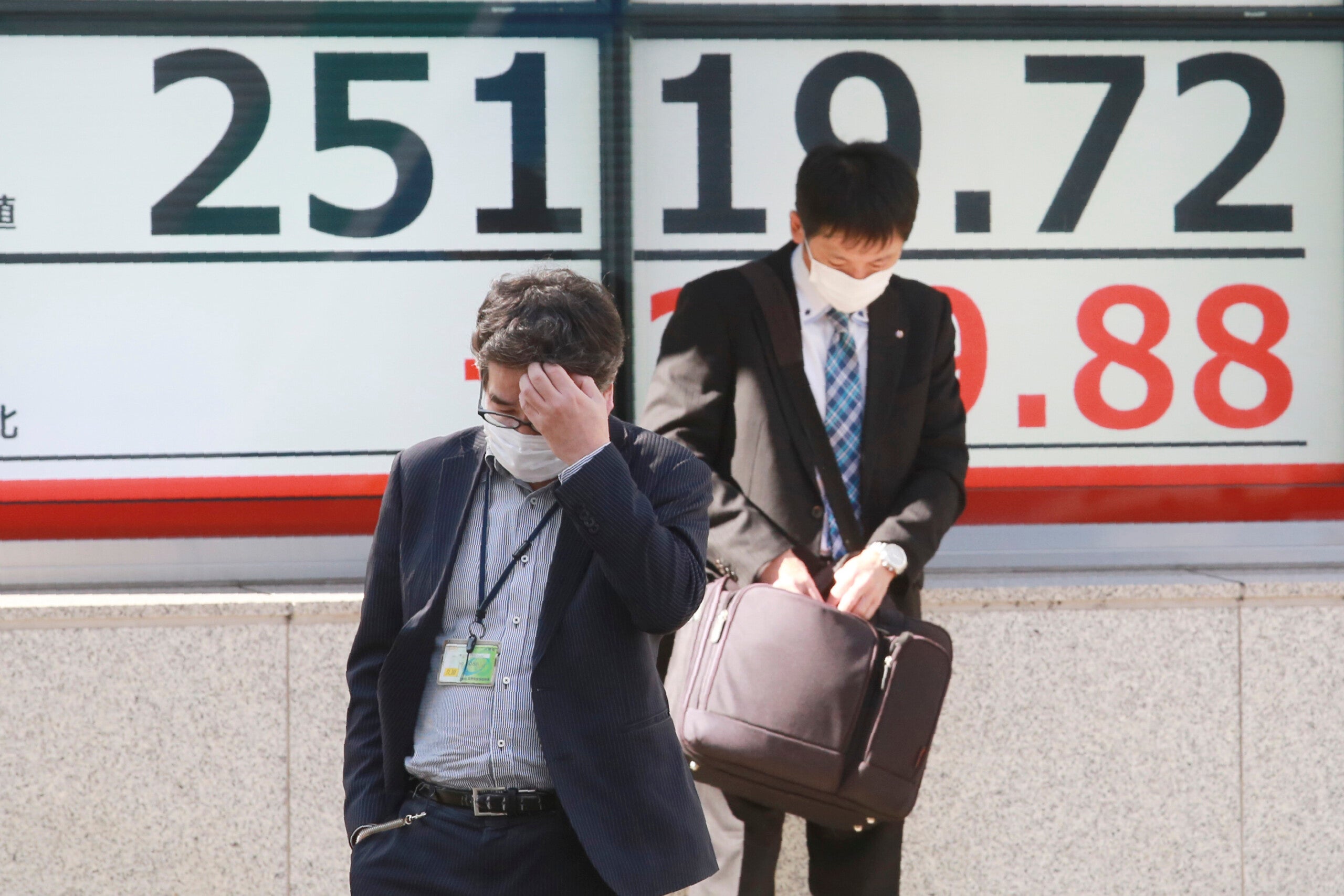 People walk by an electronic stock board of a securities firm in Tokyo, Tuesday, Nov. 10, 2020. Asian stock markets rose for second day Tuesday on hopes for progress toward a possible coronavirus vaccine that might allow the world to revive manufacturing, shopping and normal life. (AP Photo/Koji Sasahara)
by: STAN CHOE AP Business Writer
Posted: Nov 10, 2020 / 10:49 AM EST / Updated: Nov 10, 2020 / 10:49 AM EST

NEW YORK (AP) — The big rally for markets worldwide is slowing on Tuesday, but optimism remains high that the global economy may still be on track for a return to normal.

It’s the second straight day that rising hopes for a COVID-19 vaccine have investors reordering which stocks they see winning and losing, and the rotations are leaving U.S. stock indexes mixed in morning trading. Treasury yields and oil, meanwhile, are holding their big gains from a day before or adding a little more amid the increased confidence in the economy.

The S&P 500 was 0.2% lower, as of 10:15 a.m. Eastern time. The relatively small movement, though, belies a lot of churning going on underneath the surface. Roughly two out of three stocks in the index were rising.

The flashpoint for all the moves was Monday’s announcement from Pfizer that a potential COVID-19 vaccine it’s developing with German partner BioNTech may be 90% effective, based on early but incomplete test results.

“This offers a ray of hope that the market did not hesitate to take advantage of,” Tai Hui of J.P. Morgan Asset Management said in a report.

Many stock markets around the world rose a second day on Tuesday amid the optimism, from London to Hong Kong.

Stocks of smaller U.S. companies, which tend to move more with expectations for the economy than their huge, multinational counterparts, were rising more than the rest of the U.S. market. The Russell 2000 index of small-cap stocks was up 0.9%.

Ulta Beauty rose 6.5% for one of the biggest gains in the S&P 500 after it agreed to put shops in more than 100 Target stores, beginning next year. Target gained 2.4%.

The Big Tech stocks that carried the stock market through the pandemic, meanwhile, are suddenly facing more scrutiny about whether they still deserve such high prices. Their stocks soared through 2020, continuing a powerful and yearslong run, on expectations that they’ll continue to sell phones, internet services and software regardless of whether the economy is in lockdown mode.

But that’s left their stock prices looking too expensive to critics, even after accounting for their huge profits.

Amazon, which is one of those Big Tech stay-at-home winners, fell 2.7%. It also is facing antitrust charges filed by European Union regulators on Tuesday that accuse it of using its access to data to gain an unfair advantage over merchants using its platform.

The S&P 500 is already up more than 8% in November so far. Not only are hopes for a coronavirus vaccine helping to lift markets, so is clearing uncertainty about who will control the government next year.

Democrat Joe Biden over the weekend clinched the last of the electoral votes needed to become the next president. Republicans, meanwhile, appear likely to keep control of the Senate.

That’s a “Goldilocks” scenario for many investors because it could mean low tax rates and other pro-business policies remain while a more stable and predictable set of policies come out of the White House. More than anything, though, a Biden win would wipe out the uncertainty that dogged the market through the long, vicious fight for the White House.

But analysts warn many risks still hang over the market, which could easily upend all the gains made in the last couple weeks.

The biggest may be whether investors have become too convinced about a potential COVID-19 vaccine. While early results are encouraging, no vaccine is about to go on the market, and there’s no guarantee that one will or the timing of it.

Coronavirus counts, meanwhile, continue to surge at worrying rates across Europe and the United States. It’s troubling enough in Europe that several governments have brought back restrictions on businesses.

And uncertainty could easily swamp Washington again. President Donald Trump has refused to concede to Biden and is blocking government officials from cooperating with the president-elect’s team. Some Republicans, including Senate Majority Leader Mitch McConnell, are rallying behind Trump’s efforts to fight the election results.

The Republican control of the Senate that markets seem to be so heavily banking on also depends on the outcome of a pair of runoff elections in Georgia in January.

The yield on the 10-year Treasury held steady at 0.95%. It’s close to its highest level since March. Benchmark U.S. crude oil rose 1.9% to $41.04 per barrel amid hopes a stronger economy will burn more fuel. Brent crude, the international standard, rose 1.6% to $43.08 per barrel.

Stocks in Shanghai slipped 0.4% after spending most of the day in positive territory. Authorities said they have quarantined 186 people and conducted virus tests on more than 8,000 after a freight handler at the city’s main international airport tested positive for COVID-19.