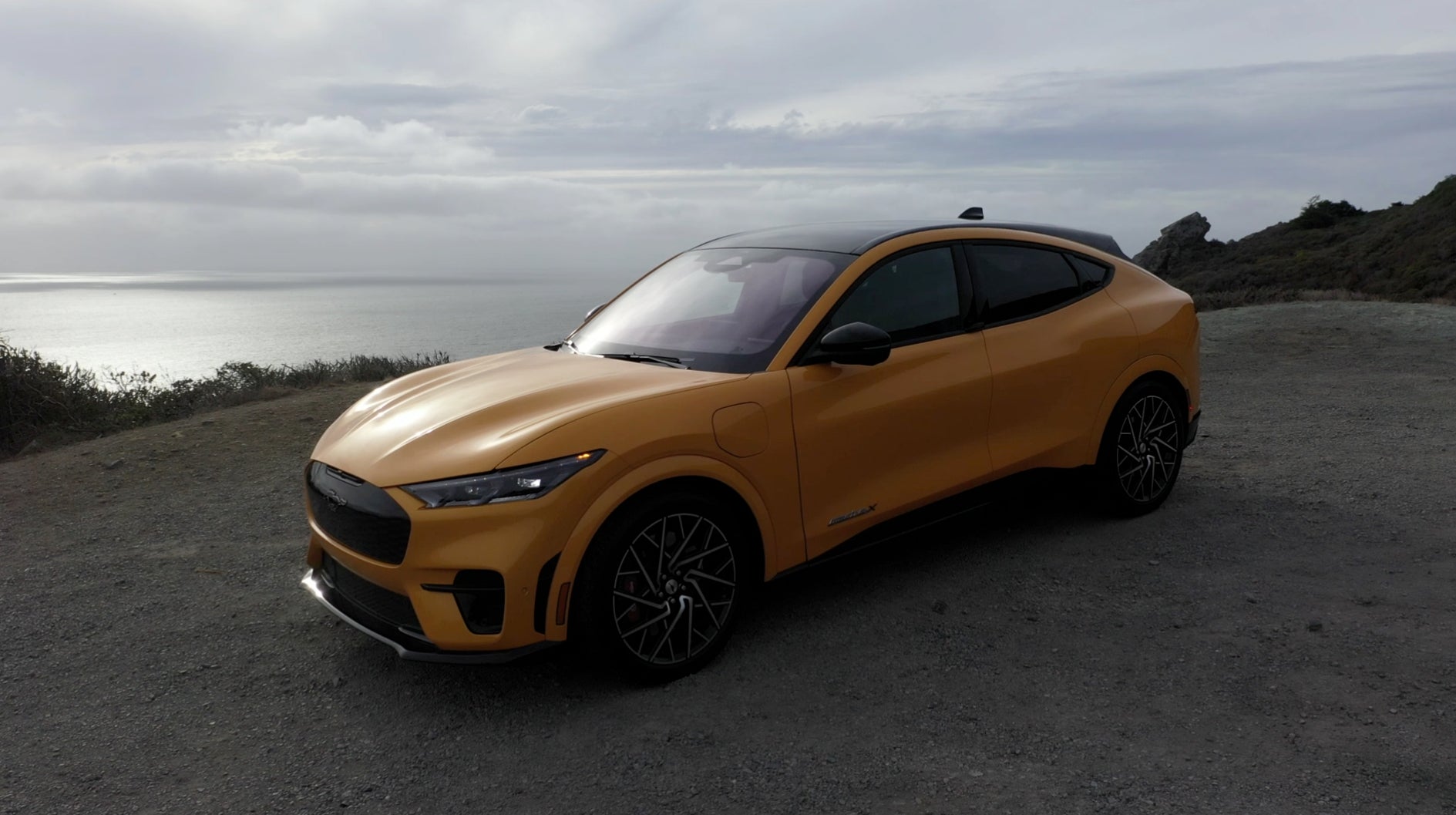 (CNN) — For a lot of people there is one real Ford Mustang. It’s the Ford Mustang GT coupe with the big 5.0-liter gasoline-burning 460 horsepower V8 engine and just two doors. These people do not accept the validity of the Mustang Ecoboost with its 310 horsepower turbocharged four-cylinder engine. And they certainly do not accept a blasphemous battery-powered four-door crossover SUV, known as the Mustang Mach-E.

So maybe the new 480 horsepower Mustang Mach-E GT will help. Whether someone is bugged by the name or not, the Mustang Mach-E GT is a great SUV that’s a lot of fun to drive as proven recently on canyon roads just north of San Francisco. At worst, it can be accused of adding some practicality to the Mustang line-up without hurting its performance credentials.

In entering the electric vehicle market, Ford decided to lean hard on the brand’s most famous names. That’s why its first electric vehicles are the F-150 Lightning pickup and the the Mustang Mach-E. The Mach-E seems aimed directly at the Tesla Model Y with its similar size and pricing, and it has been, apparently, grabbing some Tesla customers.

The basic Mustang Mach-Ecomes standard with 266 horsepower, but is available with up to 346 horsepower and with rear-wheel-drive or all-wheel-drive. It’s already quick and fun. On its own, it’s a worthy addition to the Mustang family. The Mach-E GT just adds more power — a lot more — plus suspension upgrades, performance tires and track-inspired seats.

The Mustang Mach-E can put out as much power through all four of its wheels as the V8-powered Mustang Mach 1 coupe can put to its back wheels. It produces more total power than the 455 horsepower Porsche Cayenne plug-in hybrid, which costs much more. There are more powerful electric SUVs out there, such as the Audi E-Tron, which isn’t as fun, but you will generally pay much more.

The Mach-E GT does cost more than the base models, of course, and the only real question is whether that price is worth it. This is one of those cases when, if you’re going to go for it, you probably should just go all the way and get all the high-performance stuff.

The Mustang GT is available in two versions. Both have two electric motors — one driving the front wheels and the other the back — that can produce that total 480 horsepower. Prices for the Mustang GT start at $60,000, not including the $7,500 federal electric vehicle tax credit and any other local or state incentives you might be eligible for.

Actually, 480 horsepower is a lot, especially in an all-wheel-drive electric vehicle. Besides that horsepower, the Mustang Mach-E GT produces 600 pound-feet of torque, a measure of raw pulling power. The Performance Edition produces a little more, 634 pound-feet. By comparison, a V8-powered Ford F-150 plckup can generate 400 pound-feet of torque. Electric motors, unlike gasoline engines, provide their full allotment of torque right from the start, as soon as the motors start spinning even a little. They don’t need to wind themselves up to produce maximum power.

And with all that pulling force going to all four wheels, these SUVs are very quick. The Performance Edition can launch from zero to 60 in 3.5 seconds according to Ford, comparable to what you’d get in some of the fastest sports cars on the planet. The only Mustang that’s quicker is the Shelby GT500 with its monstrous 760-horsepower supercharged V8.

That’s in a straight line, though. The Performance Edition package on the Mustang Mach-E GT shows its value in the curves. Its Pirelli tires and, probably more important, magnetic suspension, better controlled the Mach-E’s nearly 4,600 pound weight on tightly snaking canyon roads. The Mach-E GT Performance Edition is a legitimately fast and fun to drive SUV taking curves like a sports sedan.

The Mach-E, whatever the version, suffers from over-reliance on a huge touchscreen. There is, at least, a large volume knob. That’s appreciated. But changing driving modes from, say, Engaged to Unbrldled, requires digging into on-screen menus. The Mach-E’s giant screen is especially hard to use while driving since it leaves you nothing around it to steady your hand against while poking.

The Mach-E also offers something for those who don’t like driving, at least not on highways. It comes with BlueCruise, Ford’s new hands-free highway driving system. Essentially, it’s Ford’s version of Super Cruise, GM’s system that allows drivers to take their hands entirely off the steering wheel — as well as their feet off the pedals — for long stretches on select major highways. Ford’s system isn’t currently quite as sophisticated as GM’s, which, on some models, can make lane changes without the driver having to touch the wheel. BlueCruise still can’t do that. The system clearly communicates its status — when it’s ready to work and when it’s not — by changing the color of the SUVs digital gauges to blue when the driver can release the steering wheel. A driver-facing camera ensures the driver is always looking at the road.

Overall, though, the Mach-E, GT or not GT, is a powerful competitor in the still small world of electric SUVs. The Mach-E GT is good, but unless you get the Performance Edition, I’d say there are base Mach-E versions that are still plenty of fun for less money.