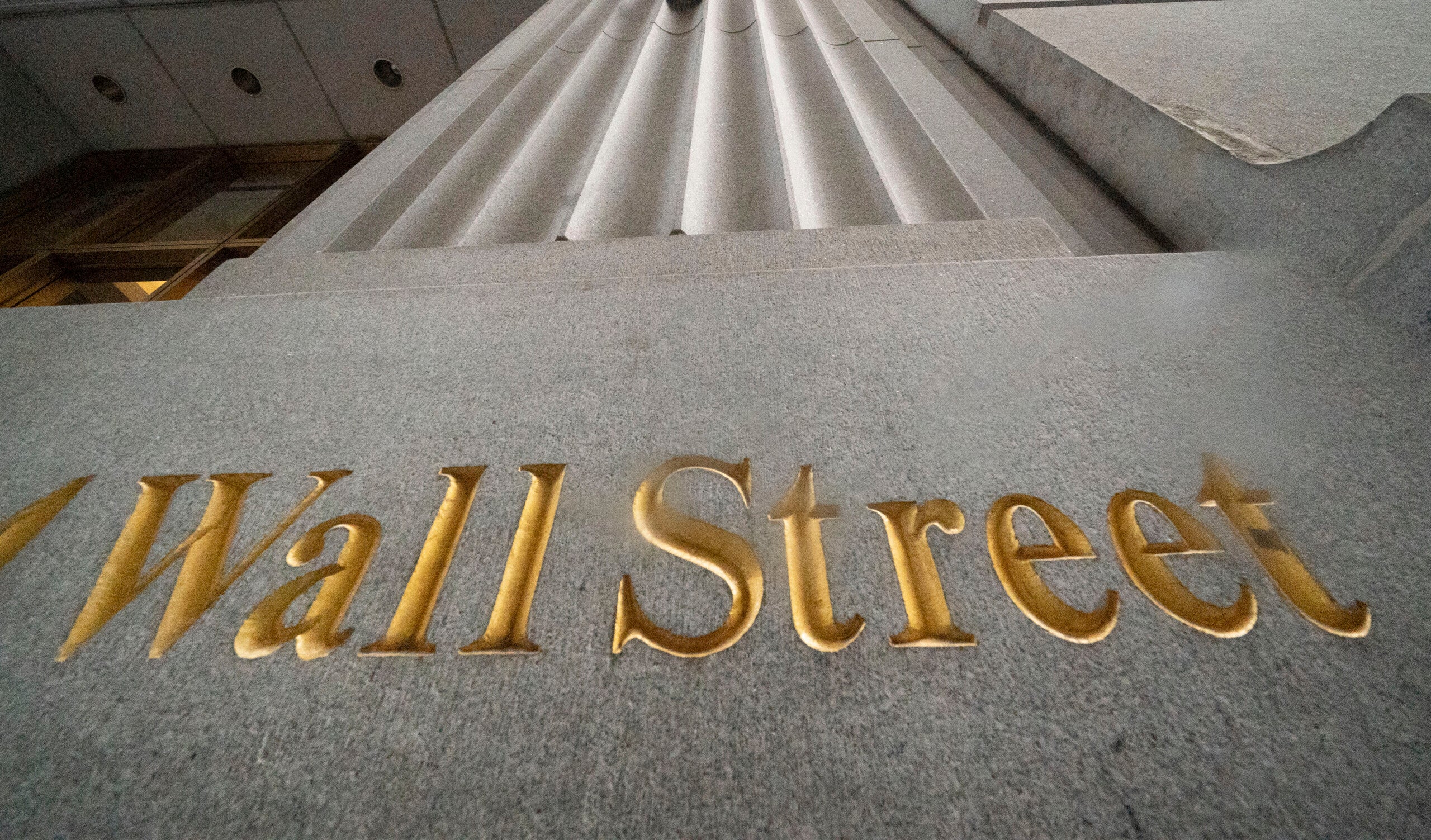 A sign for Wall Street is carved in the side of a building, Thursday, Nov. 5, 2020, in New York. U.S. futures and world shares have surged as investors await the outcome of the U.S. presidential election and embrace the upside of more gridlock in Washington. (AP Photo/Mark Lennihan)
by: STAN CHOE, DAMIAN J. TROISE and ALEX VEIGA, AP Business Writers
Posted: Nov 5, 2020 / 03:37 PM EST / Updated: Nov 5, 2020 / 04:56 PM EST

Markets are banking on Tuesday’s election leading to split control of Congress, which could mean low tax rates, lighter regulation on businesses and other policies that investors like remain the status quo. The election still hasn’t made clear who will run the White House next year, though Joe Biden is pushing closer toward the needed mark.

The S&P 500 rose 1.9%, its fourth straight gain of more than 1%, and is now up 7.4% for the week. That would be its best week since the market was exploding out of the crater created in February and March by panic about the coronavirus pandemic.

“The presidential election is not settled, the Senate is not settled, but we’re getting a post-election rally,” said Ross Mayfield, investment strategist at Baird. “The odds at this point seem fairly set in stone, so investors are feeling pretty comfortable making the bets that they’re making.”

The indexes and U.S. bond yields held steady after the Federal Reserve issued its latest monetary policy update. The central bank said that it will leave its key interest rate at a record low near zero. It also reaffirmed its readiness to do more if needed to support the economy under threat from a worsening coronavirus pandemic.

Technology stocks helped power the rally, as they have through the pandemic and for years before that. Rising expectations that Republicans can hold onto the Senate are easing investors’ worries that a Democratic-controlled Washington would beef up antitrust laws and go after Big Tech more aggressively.

Shares in cannabis companies marched higher after voters in several states cleared the way for sales of legal marijuana for adult or medical use. Tilray jumped 30.3%, though the stock is still down 54.4% so far this year.

Broadly, markets are seeing split control of Congress as a case of what Mizuho Bank calls “Goldilocks Gridlock.”

Investors see cause for optimism if either Biden or President Donald Trump ultimately wins the presidency, and what they want most of all is just for a clear winner to emerge. Stocks “fear uncertainty rather than the actual outcome,” strategists at Barclays wrote in a report.

But the expectation that Biden has a chance of winning has also raised hopes that U.S. foreign policies might be “more clear,” said Jackson Wong, asset management director of Amber Hill Capital. He added, “investors are cheering for that. That’s why the markets are performing well.”

Wall Street’s rally was widespread, with about 82% of stocks in the S&P 500 closing higher. Qualcomm jumped 12.7% for one of the biggest gains in the index after it reported stronger revenue and profit for the latest quarter than analysts expected.

That’s been the strongest trend through this earnings season, which is close to wrapping up. S&P 500 companies are on pace to report a drop in profits of roughly 8% from year-ago levels. That’s much milder than the nearly 21% decline Wall Street was forecasting at the start of last month.

Still, many analysts warn volatility may lie ahead. Big swings could return as the threat of a contested, drawn-out election still looms.

Trump’s campaign has filed legal challenges in some key swing states, though it’s unclear whether they can shift the race in his favor. A long court battle without a clear winner of the presidency could raise uncertainty and drag down stocks, analysts say.

But concerns about any big changes in tax policy during the next administration have mostly abated now that control of Congress looks as if it will remain split, said Megan Horneman, director of portfolio strategy at Verdence Capital Advisors.

“History tends to tells us that investors like gridlock because there’s really not a big chance of legislative surprises,” she said

Split control of Washington also carries potential downsides. Gridlock may lessen the chances of the U.S. government coming together on a deal to deliver a big shot of stimulus for the economy, for example.

The yield on the 10-year Treasury held steady at 0.77%. It had been above 0.90% earlier this week, when markets were still thinking a Democratic sweep was possible that could lead to a big stimulus package for the economy.

The pandemic continues to weigh on economies around the world, with counts rising at troubling rates across much of Europe and the United States. Several European governments have brought back restrictions on businesses in hopes of slowing the spread.